Piyush Goyal had earlier appeared to snub Amazon CEO Jeff Bezos' offer to invest a billion dollars in India, saying that he was not "doing a great favour to India". 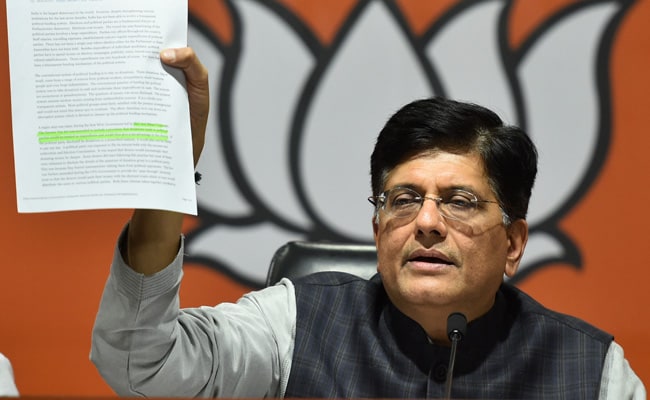 Piyush Goyal said that any eCommerce giant investing in India must adhere to the law.

A day after terming Amazon's decision to invest $1 billion in India as "no big favour", Union Commerce and Industry Minister Piyush Goyal today said that he was simply stressing on the need for e-commerce giants to not make things difficult for small traders in the country.

"We welcome all types of investments. But if the foundation of any investment violates the law, then there will be a legal process. Some people think I said something negative against Amazon. If you look at the context of my statement, I said investment should (adhere to) the law and regulations. This process is followed across the world," news agency ANI quoted him as saying.

The Union Minister's previous comment at the Raisina Dialogue 2020 in New Delhi was seen as a snub to Amazon CEO Jeff Bezos, who offered to invest $1 billion in the country soon after his arrival on Tuesday. "They may put in a billion dollars. But if they make a loss of a billion dollars every year, then they may jolly well have to finance those billion dollars. So it's not as if they are doing a great favour to India..." he had said then.

Today's comments by Piyush Goyal were seen as a clarification of his earlier assertion. "There are some laws regarding eCommerce in India. We welcome investments that come under those laws, but this investment should not create unfair competition (that will affect) small traders and retail businessmen in India," he said.

Mr Bezos had on Wednesday announced plans to invest $1 billion - around Rs 7,092 crore - and enable $10 billion in cumulative exports over the next five years by digitally enabling micro, small, and medium enterprises and traders. Today, he said that his enterprise will create a million new jobs in India by 2025 through continued investments in technology, infrastructure and logistics network.