The Centre has decided to deploy about 40,000 central paramilitary and state police personnel to secure the 46-day Amarnath yatra. 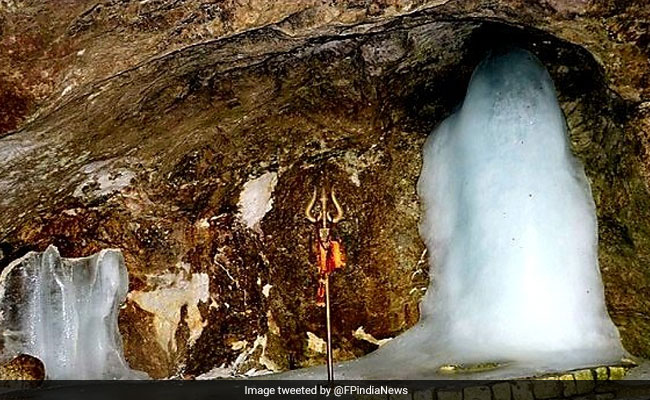 The Amarnath yatra begins on July 1 and will conclude on August 15.

Security arrangements for the forthcoming annual Amarnath Yatra in Jammu and Kashmir have been scaled up, with authorities deciding to issue a ''barcode''-enabled authority slip to pilgrims to keep a track of the actual number of people traveling to and from the cave shrine.

The Central Reserve Police Force (CRPF), that is tasked as the primary force to secure the pilgrimage that faces terrorist threats, will deploy an enhanced number of upgraded electromagnetic chips or RFID (radio-frequency identification) tags on vehicles that will transport pilgrims and other civilians associated with the yatra.

The Centre has decided to deploy about 40,000 central paramilitary and state police personnel to secure the 46-day yatra that begins on July 1 from the twin route -- traditional Pahalgam track in Anantnag district and shortest Baltal track in Ganderbal district.

It will conclude on August 15, the day Raksha Bandhan will be celebrated in the country.

Out of total number of forces, about 32,000 are specifically meant to guard the pilgrimage to the 3,880 metre high cave shrine of Amarnath in south Kashmir Himalayas.

"We will be doing a pilot project this time and Amarnath pilgrims will be issued barcoded yatra slips. This will help us in ascertaining the exact number of pilgrims who are on the move and will also help in the ensuring an overall better security setup," CRPF Director General (DG) R R Bhatnagar told PTI.

The DG said the shrine board authorities and security agencies have prepared a "detailed plan" to ensure that all pilgrims who register for the yatra are given the barcoded authority slips that will contain their vital details, photographs and contact numbers.

All security challenges will be taken care of and any input or concern vis-a-vis security will be worked upon by all the stakeholders in the state government and the Centre, DG Bhatnagar said.

A senior official based in Kashmir said the yatra slips will be triplicate, one each for the shrine board, pilgrim and for handing over to the checking staff on route.

There will be access control checking gadgets that will be deployed both at the Pahalgam and Baltal routes, he said. The barcode will capture all the information of a pilgrim and it can be accessed by a click of the mouse, the official said.

The CRPF has also procured upgraded RFID tags and will use to mark the civilian vehicles plying on the yatra route. This technology tool was used for the first time during the yatra last year and thousands of these electromagnetic chips were put on the vehicles.

Keeping in the mind the security challenges that emerged after the February 14 Pulwama terror attack, the CRPF has also deployed an enhanced number of its counter-IED teams that will sweep roads and vehicles against such threats.

A suicide bomber had used a heavy volume of improvised explosive device (IED) to trigger a blast on the Jammu-Srinagar highway that killed 40 CRPF men near Pulwama.

The force will deploy road opening parties to secure the transit roads in coordination with the Army, Jammu and Kashmir Police and other central forces like the Border Security Force and the Indo-Tibetan Border Police force, the Kashmir-based official said.

While 300 companies of central forces have been asked to stay put in Kashmir valley after the Lok Sabha elections, about 16 are being sent in now, the official said.

If need arises, more forces would be sent in before the yatra commences, he said.