Amarnath Yatra: Hundreds of pilgrims, including sadhus (saints), have started arriving in Jammu and are enthusiastic about undertaking the pilgrimage. 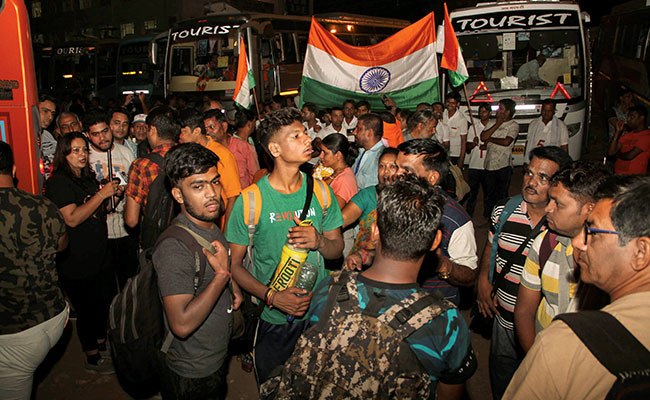 All necessary arrangements are in place as the first batch of Amarnath pilgrims are scheduled to leave for Kashmir amid tight security on Sunday, a day ahead of the formal commencement of the annual pilgrimage in the Valley.

Over 1.5 lakh pilgrims from across the country have so far registered themselves for the 46-day long yatra, which takes place from the traditional 36-km Pahalgam track in Anantnag district and 14-km Baltal route in Ganderbal district, officials said.

Hundreds of pilgrims, including sadhus (saints), have started arriving in Jammu and are enthusiastic about undertaking the pilgrimage.

Divisional Commissioner, Jammu, Sanjeev Verma said all necessary arrangements, including security, have been put in place to facilitate the pilgrims and ensure their safety during the yatra, which will be conducted under the surveillance and close coordination of various security agencies.

The yatra is scheduled to end on August 15 coinciding with the Raksha Bandhan festival.

Inspector General of Police, Jammu, MK Sinha said adequate security arrangements have been made all along the yatra route right from Lakhanpur -- the gateway to Jammu and Kashmir bordering Punjab -- besides base camps, lodgement centres, halting stations and community kitchen sites in view of threat perception.

Though there was no specific intelligence about any plan by terrorists to disrupt the yatra, the security arrangements had been made in view of the present security scenario of the state to foil any attempt by anti-national elements, he said.

Akash Tamrikar, 21, who had come from Chhattisgarh along with his Uncle Raj Kumar for the yatra, expressed satisfaction over the arrangements and said he is waiting eagerly for ''Darshan'' (glimpse) at the shrine.

"This is for the fifth time I am undertaking this yatra to have darshan of the shivlingam and never faced any problem...the (Shri Amarnathji) shrine board and the state administration is doing well as every year we witness improvement in the arrangements," Mr Tamrikar, who had secured the registration for the first-day yatra on July 1, told PTI on his arrival at the main base camp, Bhagwati Nagar.

The pilgrims will be taken in a convoy to their desired destinations, Pahalgam base camp or Baltal base camp in the valley, to proceed for the cave shrine by foot after night stay there.

Gautam, 50, a businessman from Punjab, said he started visiting the shrine since 2000 and had never missed any yatra since then.

"I had tracked both Pahalgam and Baltal routes and this time I am going through Baltal," he said, adding besides seeking the blessings of lord Shiva for himself and his family, he would like to pray for peace and prosperity in the country in general and Jammu and Kashmir in particular.

The yatra will be led by a group of sadhus who are separately staying at Ram temple in the Purani Mandi area of old city where their registration for the pilgrimage started this morning.

Union Minister Jitendra Singh inaugurated the registration centre set up for the sadhus and lauded the Mahant of the temple, Rameshwar Dass, and the district administration for making necessary arrangements for the saints.