"Should Get 82 Of Them": Amarinder Singh Wants Revenge For Pulwama Attack

Amarinder Singh said India should take tough coercive action against Pakistan, which, he said, could be military, diplomatic or economic, or a combination of all three. 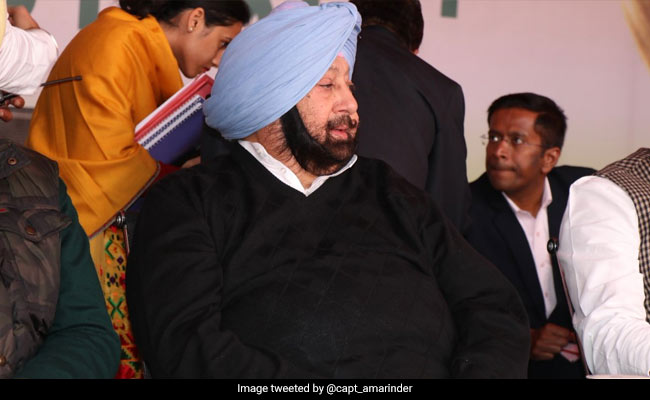 Captain Amarinder Singh said there was time for talk but not now. (File)

Demanding a strong action against Pakistan in the wake of the Pulwama terror attack that killed over 40 CRPF personnel, Punjab Chief Minister Amarinder Singh said the security forces must kill double the number to send a strong message to the terrorists' organisation and Pakistan.

"We should get 82 of them since 41 of our men have been killed," said Captain Singh, who was an army officer before joining politics. He demanded an "eye for an eye, a tooth for a tooth".

In a strongly-worded comment, Amarinder Singh said India should take tough coercive action against Pakistan, which, he said, could be military, diplomatic or economic, or a combination of all three.

He said the time for action was now.

"No one is asking anyone to go to war, but these killings of soldiers are not a joke. Something has to be done. I'm fed up, the country is fed up," a visibly agitated Captain Amarinder Singh told reporters outside the state assembly.

Mr Singh dismissed nuclear threat from Pakistan, saying the country had the weapons during the Kargil war but it was defeated by the Indian forces. "Pakistan can't hold India to ransom just because they are a nuclear nation, even we are nuclear," he said.

"There is time for talk but that is not now," he said.

Even as the Punjab Chief Minister talks about tough action against Pakistan, his minister, Navjot Sidhu, had said that the entire nation could not be held responsible for the acts of terrorists. He was panned by the opposition for his comment, but he said on Monday that he was firm on his stand.

"I want to ask who released those involved in 1999 Kandahar incident? Whose responsibility is it? Our fight is against them. Why should a soldier die? Why can't there be a permanent solution? Terrorism has no community. The issue is not what I am saying - the issue is this (terrorism). Our fight is against those who claimed responsibility (for 1999 attack). It is my fight as well," said Mr Sidhu.

"I am firm on my stand. Terrorism will not be tolerated. People who are responsible should be punished so harshly that it acts as deterrence for generations to come," he added.

Mr Sidhu was attacked in the Punjab assembly, with the Akali Dal demanding his resignation.

"Navjot Singh Sidhu should be suspended from the Congress party for his comments on Pakistan. In fact, a case should be registered against those who make anti-national statements," said Akali Dal leader Parkash Singh Badal.

Over 40 soldiers, who were on their way to Srinagar to report for duty after leave, were killed when Jaish-e-Mohammad terrorist Adil Ahmed Dar drove his car close to a CRPF convoy on the Jammu-Srinagar highway and detonated around 60 kg of RDX.

Prime Minister Narendra Modi has promised the nation that the perpetrators of the attack would be punished.

After the attack, India has tried to isolate Pakistan diplomatically. The government says over 40 countries have supported India.

A key Jaish-e-Mohammad terrorist, believed to be the mastermind of the Pulwama terror attack was shot dead today, in a 12-hour encounter in which India lost four soldiers, including one officer.