"Allow us to make mistakes, allow us to learn": The Arvind Kejriwal interview 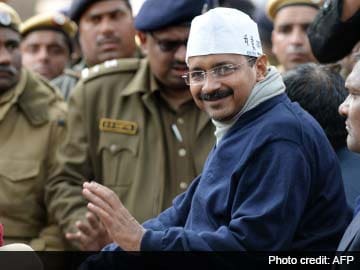 Surrounded by idols of the deity Ganesh, books on Mahatma Gandhi and the translated Quran and activism awards,  Kejriwal sipped a glass of warm water for his bronchitis as he spoke.

This interview comes as the party faces growing criticism on how it is governing Delhi.

What mistakes have you made and what lessons have you learned in these first days of running the Delhi government?

You see the most important is that you need to have right intentions. And this present government, people have the right and honest intentions, which has been lacking so far in the previous governments and in the other parties. All the other parties, their only agenda is how to make money, how to indulge in corruption and how to loot the country. Aam Aadmi Party government has been trying to do whatever they can with all sincerity. We can make mistakes, we are making mistakes. I'm not saying that we know everything. But all that I'm saying is that we've not made any earth-shaking mistakes. And judgments are being passed against us I think too soon. Please allow us to make mistakes, please allow us to learn. And we will change because at the end of the day, the intentions are honest.

Do you think that message has been diluted by what some people see as old-school politics to protect a minister who is being questioned for some of his actions?

Of course not. Why should we protect him? He's not my uncle or my cousin. Now as far as Somnath Bharti is concerned, our entire team, the top leadership of the party, we sat for three to four hours, we looked at all the evidence and we what we found was that he has not done anything wrong. He made two statements which could be held to be objectionable, but that's it. One he said that 'I would spit on such leaders' - he said something for the opposition leaders. He should not say that. And two-three days back he said that, when some journalists asked him a question ... Actually the journalists at that point of time were haranguing him. They were not allowing his car to move. They surrounded his car. They thrust the mikes inside his window. He was politely saying that 'I don't want to speak to media. Please allow me to go.' He was not allowed to go. Then he said 'how much money do you get from the opposition parties to ask these questions?' Otherwise what other wrong he has done? But on the basis of these two questions you can't dismiss a ... you can reprimand him. We've told him many times to control himself but there's nothing else.

But the more serious charges relate to stirring up anti-immigration sentiment. The African community in Delhi is now feeling a little bit under siege.

It is wrong to say and I would encourage you, we have the video footage of the entire night and we saw that entire footage. That is the reason I'm speaking with so much confidence, and I would encourage you to see that entire footage. He is not encouraging any mob. He is politely and pleading before the police that, look, this wrongdoing is taking place, take some action. And any responsible citizen is supposed to do that. Under the law also, if any citizen comes across any crime, he's immediately supposed to report to the police and ask them to take action. He's not done anything wrong. He's not against any community. He's not against any country. That is all. It has been by some sections of the media and by the opposition parties, this entire thing has been turned into a racist or that kind of a controversy.

So are you saying that the African women are lying?

I think I should not comment on that. Let the enquiries be over. But there is no evidence of ... Because if you see the entire footage of that night, he's not done any such thing. In every society, in every country, there are good people and there are bad people. We need to respect the good people and we need to act against the bad people. He actually hit upon a huge drug racket and a sex racket. We ought to take action against that.

I personally called up the ambassador of one of those countries that day when this controversy broke out just to tell them that he was - it was a holiday for him and they did not pick up the phone - and I wanted to tell them that, look, as a chief minister, I am very concerned about their safety. And I will go to any extent just like I go to any extent to protect the dignity of Indian women and to protect the rights of Indian people, I will go to any extent to protect the rights of people from other countries. In fact, I will put more of my energy at stake because all those people are our guests, they are our respected guests, and we would not like any harm to take place to those people. So it is unfortunate that some vested interests have tried to turn it into a racist kind of controversy.

The dharna (sit-in protest) for some supporters felt like a shift from what they're expecting. Do you think the dharna was a good move for your government? Do you think it's something you'll continue doing in the future if you run up against issues?

If there's a need, I'll again sit on dharna. Delhi police is not directly controlled by Delhi government. Till now what happens is, after becoming chief minister, if I had taken a big bungalow, if I had taken a big car, or if I had taken a huge posse of security men and then if I had called a senior police officer and I said that, look, now I want 10 lakh rupees (about $16,130) every month from every police station, there wouldn't have been any controversy. Everyone (would say) 'very good chief minister, very good chief minister'. And then if a rape had taken place I would have gone out and said, 'The police is doing its job. The law is taking its own course. We will soon catch the culprit.' And the story would have gone on like that. When that Danish woman was raped, that time I had asked the police commissioner, someone has to be held accountable. The police is one of the most corrupt institutions that we have. And this is what I targeted and that's why there's been so much of reaction.

Getting Delhi police under your control has to go through parliament. Given that all three parties have this demand, why didn't you have an all-party meet and push this through Parliament?

Those two parties have been sitting in Parliament for so many years. They say something else in public. Putting it in manifesto is just a PR exercise. It's just to make a fool of the public. If those two parties had done something in this country, Aam Aadmi Party would not have come in existence. Aam Aadmi Party is basically the rise of the common man in this country against this system. Therefore I cannot sit in my office, and say that 'what can I do? Delhi police is not in my control.' We will not do that. We will go and agitate. Whatever work can be done from the office I will do it from the office and if I feel helpless, I will go and agitate with my people. So you don't think they can be a legislative recourse for the ...

Both the things are there. Legislation is also important and the agitations are also important. The agitations on the streets and mohallas (neighbourhoods), they strengthen democracy, they don't weaken democracy. And suddenly I find there's so much of this thing as if I have done some kind of crime sitting on the dharna. They said it's unconstitutional. I read the Constitution again and again and I didn't find any Article which said that it's unconstitutional for a chief minister to sit on a dharna. It's not written.

When will your national campaign get started?

I think it's already started. Many of our leaders are travelling all across the country. But again, it's not important for us to fight elections. We are not here to fight elections and acquire power. The acquisition of power is not our politics, the politics is to remove corruption from this country. That's our politics. So, the most important thing is there are a large number of cabinet ministers who have indulged in corruption, they need to be defeated. There are almost 162 people in Lok Sabha who have criminal charges against them and there are 73 out of them who have serious criminal charges against them, those people need to be defeated. We will put up strong candidates against them. Now, it is for the people to decide whether they want to support clean politics or not. Earlier the people used to say 'we didn't have option', now we will provide them a clean option.

In Delhi elections, you set a funding goal. What is the goal set for the national elections?

Frankly, I have not been able to talk to the party leaders for some time. I was too busy in the government. In the next few days, I will talk to them and find out. Broadly, you must have a sense of the challenges ahead in funding. Funding will never be a challenge. At least that is what my small experience in activism tells me.

Seven crore rupees have been collected in the last 15-20 days. The people will give you money. If it is my fight to acquire power, then money is a problem for me. It is their fight. It is the people's fight. We are not fighting for ourselves. And if people take it to be their fight, then money will not be a problem. And is what happened in Delhi also. We didn't have any money. The people gave money.

Do you feel the need to pursue wealthy individuals realistically to get financing?

As I said, financing is the least of the problem. It is not financing that is important for us. It is basically to inspire the people of this country, to stand up, rise and fight. The day the people of India get up and start fighting, I think the rest of it will start falling in place.

Would you be willing to become prime minister if that situation arises?

I am not interested in becoming prime minister and I am not here to stay as chief minister. The fight is for the country and it will stay like that.

If your party wanted it?

This story has been re-formatted and editing from the original story from Reuters.
© Thomson Reuters 2014