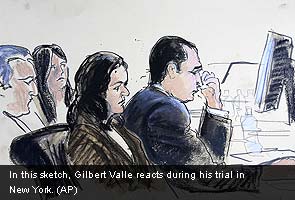 New York: A New York City police officer and a butcher in India chatted online about the officer's plans to torture and cook his soon-to-be wife and a former college roommate, an FBI agent testified on Wednesday.

"I have longed to butcher and cook female meat," Officer Gilberto Valle, 28, told the man identified as Aly Khan early last year, according to the testimony of FBI Agent Corey Walsh. Khan offered to provide a place in Pakistan to kill the woman once she was brought to India, Walsh said.

The exchange was among numerous Internet chats offered by prosecutors to support charges that Valle conspired with others on the Internet to kidnap, rape, kill and eat women that he knew. Also charged with illegally accessing a government database to research potential victims, Valle could face life in prison if convicted.

No women were injured, and defense lawyers have argued he was merely fantasizing on the Internet with no intent to harm.

For two days, Walsh has testified about chats Valle participated in last year with a New Jersey co-defendant and two co-conspirators: a man in Great Britain and Khan, both of whom posed on the Internet as veterans of cannibalism who could teach Valle the skills he would need.

In several emails read by Walsh, Valle seemed eager to make the woman he would marry a few months later an offering of sorts to Khan, though he added: "She is a sweet girl. I like her a lot. But I will move on."

Valle wrote that he could talk her into going on a trip to India before they took her to Pakistan, where they could gag her and take her to a basement, where they could hang her from her feet and take turns sexually assaulting her before slitting her throat and cooking her.

"I just love the thought of stringing her upside down," Valle wrote in an email displayed to the jury. He also said he would like "to see her suffer" and "slowly roast her until she dies."

In a later email, Khan taunted Valle for failing to deliver a woman.

"Are you really into it?" he asked.

"Are you sure?" Khan asked.

Khan, apparently pleased with the response, said: "Get your mind ready. I will guide the rest."

As the instant messages progressed over a series of weeks, Valle began discussing plans to attack a 27-year-old Ohio woman he knew in college.

"I want her to experience being cooked alive," he said in one exchange. "She'll be trussed up like a turkey. ... She'll be terrified, screaming and crying."

He wrote that her death would "definitely make the news" and there will be "plenty of suspects" because she is a prosecutor.

The woman, Andria Noble, testified Monday that she never knew Valle to be violent when they were at the University of Maryland together.

Under cross examination, defense attorney Robert Baum attacked the FBI agent's statement that 40 of the thousands of Internet communications of Valle that he reviewed contained "elements of real crimes."

Baum aimed to show little or no distinction existed between chats or emails the FBI deemed real evidence of a crime and those dismissed as fantasy.

The agent conceded both had similar elements: Valle discussing how to cook women, how much it would cost to abduct them and which women would make good targets.

Walsh, the agent, conceded that some chats or emails considered fantasies contained photographs and names of real women and dates and references to past crimes, the kind of factual information that prosecutors have insisted proves Valle meant to carry out gruesome crimes including kidnapping, rape, torture, murder and cannibalism.

The agent also conceded that no women were kidnapped or harmed and that Valle never had contact with his supposed co-conspirators outside the Internet.

In addition, the agent said, no evidence of a crime was found in Valle's apartment besides a computer. There was no rope, pulleys or chemicals to render someone unconscious despite Valle's Internet boasts that he wanted to assemble a torture chamber or that he had an upstate property where he could cook women, Walsh said.

If jurors are offended or horrified by the gruesome testimony, they haven't shown it. Three of them even yawned during the reading of the Internet exchanges.

The six men and six women sitting on the jury mostly sat stone-faced and silent on Tuesday and Wednesday as they listened to the agent's monotone recitation of seemingly grimace-worthy evidence - remarks by Valle like, "I'm dying to taste some girl meat" and discussions about using one potential victim's severed head as a centerpiece for a feast of body parts.

Valle's 27-year-old wife, Kathleen Mangan-Valle, has testified that she fled their New York City home in September with their infant daughter after discovering that Valle spent hours at night on extreme sexually violent websites, including one that catered to those interested in cannibalism and asphyxiation. In Nevada, she turned over a computer to the FBI that contained hundreds of Valle's emails and instant messages with what the government has described as co-conspirators.
Comments
New York cannabalism