Unsatisfied by the minister's reply during the Question Hour, the Congress members including former prime minister Manmohan Singh staged a walkout. 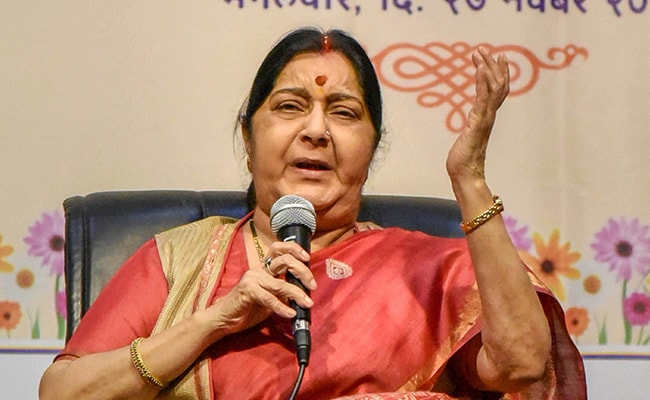 Sushma Swaraj said there is no controversy in the Rafale deal. (File photo)

Asserting that every issue raised by the Congress on Rafale deal has been clarified by the Supreme Court, External Affairs Minister Sushma Swaraj on Thursday said in Rajya Sabha that there is no controversy in the matter, except in minds of the opposition party leaders.

Unsatisfied by the minister's reply during the Question Hour, the Congress members including former prime minister Manmohan Singh staged a walkout.

Congress leader Anand Sharma in his supplementary query demanded that the government make public the minutes of the meeting of Prime Minister Narendra Modi and former French President Fracois Hollande held last year on the Rafale deal in a bid to settle the controversy once for all.

To this, Ms Swaraj said, "Anandji, there is no controversy. Controversy is there in your mind. All the controversy issues that you (Congress) raised, the Supreme Court has clarified on each of them. Please don't use the word controversy again."

She said, "The whole country knows there is no controversy. The Supreme Court has cleared each issue. If you still think there is a controversy, then no one can reply."

To a query raised by Shiv Sena member Sanjay Raut if there was any discussion on the Rafale deal during the recent visit of French Foreign Minister Jean-Yves Le Drian to India, Ms Swaraj said, "There was no discussion on the matter."

"On that day, the Supreme Court verdict (on Rafale deal) was pronounced. He (French Minister) was very happy. He expressed joy and felt there was no need to have discussion," she said.

On the Indo-French fund for developing script for co-production of films, the Minister said the French delegation had visited Mumbai and had discussion with representatives of Bollywood besides meeting the state chief minister.

To another query on the Jaitapur Nuclear Power project, Ms Swaraj said that an agreement was signed on March 22, 2016 to set up a plant. France's EDF and India's NPCL are looking into it.

"Six EPR units are to be set with each unit having a capacity of 1650 megawatt. Once it is ready, it will be the world's largest nuclear plant," she said.

The project was reviewed in March last year, when the rate of power per unit and setting up of a reference plant were also discussed.

"We will proceed after seeing the model plant. We have decided about the dates," she added.