The Election Commission of India did not bother for the health and safety of the people of India. Rather, the Assembly Elections were conducted as per the schedule without taking care of the health and life of citizens of India, it said. 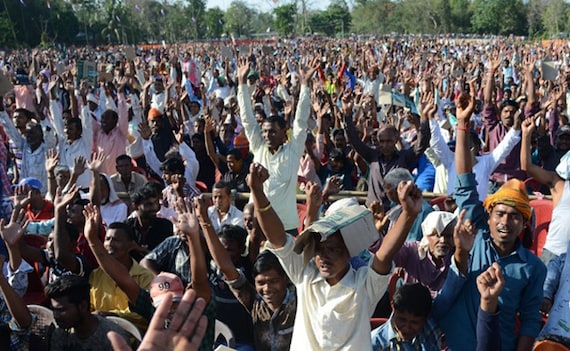 All India Bar Association has requested to defer elections in Goa, Manipur, Punjab, UP, Uttarakhand

The All India Bar Association (AIBA) on Sunday sent a representation to the Election Commission of India requesting to defer the upcoming elections in Goa, Manipur, Punjab, Uttar Pradesh and Uttarakhand due to spread of Omicron variant of COVID-19.

Senior Advocate Dr Adish C Aggarwala, Chairman of AIBA stated that nowadays, in election rallies, a very large number of people are gathering without adhering to Covid protocols. the representation stated that if the elections in these States are not postponed till Omicron COVID-19 is over, then again lakhs of people will die in India despite the best efforts of the Central Government and State Governments, similar to what happened during the second wave of COVID-19.

Representation stated that the second wave of COVID-19 was also spread by the negligence committed by the people of India during the election held in 4 States namely Assam, Kerala, Tamil Nadu and West Bengal and one Union Territory namely Puducherry.

The Election Commission of India did not bother for the health and safety of the people of India. Rather, the Assembly Elections were conducted as per the schedule without taking care of the health and life of citizens of India, it said.

"Now the 5 other States, namely Goa, Manipur, Punjab, Uttar Pradesh and Uttarakhand are going to have Assembly elections as per the schedule without considering that the Omicron variant of Covid-19 is gaining peak and health emergencies have been imposed in the many Indian states and various other countries. Various countries, such as China, The Netherlands, Germany etc. have imposed partial or complete Lockdown due to rising cases of COVID-19," stated representation

"Now, again, the same situation is developing due to electioneering for Legislative Assembly elections. Day by day cases of Omicron COVID-19 is increasing rapidly. But it is shocking to see that in a press conference in Lucknow on 30.12.2021, the Chief Election Commissioner of India Sushil Chandra said that there would be no delay in conducting the upcoming Assembly poll in the State after meeting the representatives of all the political parties who urged him to hold the elections on time," the representation added.

The Election Commissioner of India has taken the decision to ensure the interest of political parties and not 'We, the People of India', who are approximately 135 crores. Article 21 of the Constitution of India mandates the Right to Life and no Constitutional authority shall violate this most valuable Right, stated the representation.

Sr Advocate Dr Adish C Aggarwala also stated that the aspirations of political parties to hold elections on time cannot and should not be greater and valuable than the Right to Life as guaranteed under Article 21 of the Constitution of India.

Under Section 153 of the Representation of the People Act, 1951, read with Article 324 of the Constitution of India, the Election Commission can extend the time for completing an election for the reasons which it considers sufficient to extend the time for the completion of any election.

"Law and order, natural calamities like COVID-19 pandemic, earthquakes and floods, or any other compelling circumstances which are beyond Election Commission's control, can be grounds for extension," the representation read.