All Eyes On UP As Amit Shah, Rahul Gandhi To Begin Recce In State

Amit Shah will visit Mirzapur, a district in Prime Minister Narendra Modi's constituency, Varanasi and represented in Lok Sabha by ally Apna Dal's Anupriya Patel. He will be Agra the next day. Rahul Gandhi will be in Amethi for the same two days. 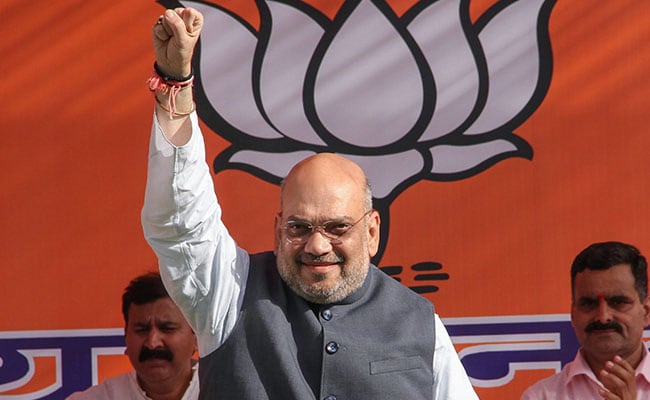 Amit Shah will visit Mirzapur and Agra this week, Rahul Gandhi will be in Amethi.

BJP chief Amit Shah and Congress President Rahul Gandhi, both key players in next year's Lok Sabha polls, are heading this week for Uttar Pradesh, the state that sends the maximum number of lawmakers to the Lok Sabha.  Mr Shah's visit is seen as another mark of special attention for the crucial state, where the BJP recently suffered a string of defeats in by-elections. Last week, Prime Minister Narendra Modi had started the party's 2019 campaign from the state.

The dates of the visits of Mr Shah and Mr Gandhi coincide -- July 4 and 5. The two leaders, though, will be in different parts of the state - Rahul Gandhi will be his Lok Sabha constituency Amethi, where his last visit was cancelled for security reasons.

Mr Shah meanwhile, will head for Mirzapur, a district in Prime Minister Narendra Modi's constituency, Varanasi. Mirzapur is the stronghold of the BJP's regional ally in UP -- Union Minister Anupriya Patel's Apna Dal. The minister represents Mirzapur and is one of the two lawmakers her party has in the Lok Sabha.  In his day-long visit on Wednesday, the BJP chief is likely to address and interact with grassroot-level workers of the party in Mirzapur and Varanasi. The next day he will be in Agra, the constituency of the party's senior state leader Ram Shankar Katheria.

Last week, PM Modi chose to launch the BJP's 2019 campaign in the state -- not from Varanasi, but a smaller, more obscure town near Chief Minister Yogi Adityanath's Gorakhpur.

With Dalit powerhouse Mayawati and Samajwadi Party chief Akhilesh Yadav leading the opposition charge in Uttar Pradesh, the Prime Minister invoked Sant Kabir's message of equality of all, above caste and religion, in Maghar -- the place where the 15th Century mystic breathed his last.

In his address, the Prime Minister had attacked dynastic politics and was particularly harsh on Akhilesh Yadav, who was recently accused of vandalising his government bungalow before vacating it.

Maghar is barely 30 km from Gorakhpur, the prestigious Lok Sabha seat where the BJP met the first of its string of defeats in by-elections in the state.

The seat, held for five consecutive times by Chief Minister Yogi Adityanath, was lost in face of the united forces of Samajwadi Party and Mayawati in March. Phulpur, held by Yogi Adityanath's deputy Keshav Maurya, was lost as well. The party took another round of beating in May, with the loss of the parliamentary seat of Kairana and the assembly seat Noorpur in face of a united opposition.

Rahul Gandhi's two-day visit to Amethi was originally scheduled to take place in June but was postponed because of security reasons.
The visit comes as Mayawati and Akhilesh are looking to formalise their alliance before the 2019 polls.

Despite the bonhomie seen between the state's Dalit powerhouse and UPA chief Sonia Gandhi during Karnataka Chief Minister HD Kumaraswamy's oath ceremony in May, there is speculation that all Mayawati and Akhilesh Yadav are willing to offer the Congress are two seats in a 'take it or leave it' bargain. The seats are Amethi and Rae Bareli, which belong to Mr Gandhi and his mother.

During his Amethi visit, Mr Gandhi is likely to address small public meetings and visit the home of a farmer who died at a local mandi, allegedly from the stress of waiting for days to sell his grain to the UP government.