Akkitham started gaining attention in the early 1950s for his modernist poems, first of which "Khandakavya" was published in 1952. 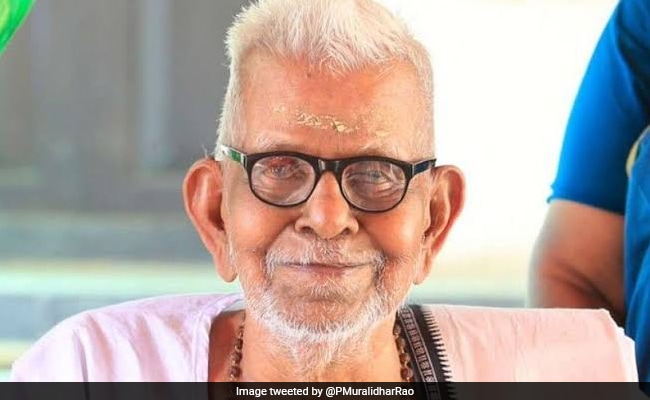 Akkitham Achuthan Namboothiri, philosopher and poet, has been chosen for this year's Jnanpith award. The 93-year-old poet, fondly known as Akkitham, said that he was happy and humbled by the honour. Many, including Edassery and VT Bhattathiripad were great poets and deserving of the award, he said. "Maybe I am being blessed with the honour as I have had a longer life," Akkitham was quoted as saying by news agency PTI.

One of the most revered names in Malayalam poetry, Akkitham's literary excellence has footprints in several genres like drama, reminiscence, critical essays, children literature, short stories and translation.

Akkitham started gaining attention in the early 1950s for his modernist poems, first of which "Khandakavya" was published in 1952.

He has published 45 books consisting of poetry, anthologies, plays and short stories.

Congratulatory messages poured in for the famous poet on Twitter:

It's no exaggeration to say that Jnanpith is honoured today! For the author of 'The Legends of 20th Century', the recognition comes better late than never...
Congratulations to our beloved poet, Pranams most revered Rishi Akkitham.https://t.co/7cUM7nD86Y

I am glad to know that noted Malayalam poet Sh. Akkitham Achuthan Namboothiri has been conferred the prestigious #JnanpithAward for his outstanding contribution to Literature. I congratulate him and pray for his long life.

His works have also been translated into many Indian and foreign languages.