Ajanta Neog and Rajdeep Gowala had met Union Home Minister Amit Shah in Guwahati on Saturday to finalise their joining. 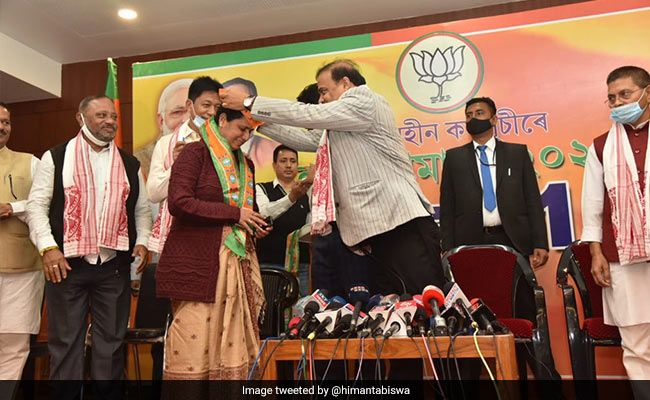 Months ahead of the Assam assembly elections, the Congress suffered yet another jolt with two former MLAs Ajanta Neog and Rajdeep Gowala joining the BJP today.

Ms Neog and Mr Gowala had met Union Home Minister Amit Shah in Guwahati on Saturday to finalise their joining. Soon after, Ms Neog had announced that she will be joining the BJP in the next couple of days.

With these departures, the Congress can no longer retain its Opposition party status since it is reduced to only 20 MLAs now in the 126-member assembly. To remain the main Opposition party in the Assam legislative assembly, a party needs to have at least 21 MLAs.

Both leaders joined the BJP in the presence of Assam BJP president Ranjit Das and BJP's key strategist in the Northeast Himanta Biswa Sarma.

The new BJP recruits also claimed that while the ruling party is futuristic, the Congress is a "visionless party".

After joining the BJP, Mr Gowala said there is "no discipline in Congress" and the party is "directionless".

"Congress is a party with no future, no vision - it's directionless, there is a leadership crisis and it cannot do anything good to the people," Mr Gowala added.

Mr Gowala and Ms Neog are former Congress MLAs from Lakhipur and Golaghat respectively. Ajanta Neog was a close confidante of former Chief Minister Tarun Gogoi and part of his cabinet as well.

Both the leaders had resigned from the state assembly and the Congress party had expelled them for their alleged "anti-party" activities. Rajdeep Gowala was expelled for six years from the party.