The Air Force chopper made several sorties and poured buckets full of water on the raging fire which was a threat to the whole village in Jammu and Kashmir, according to officials. 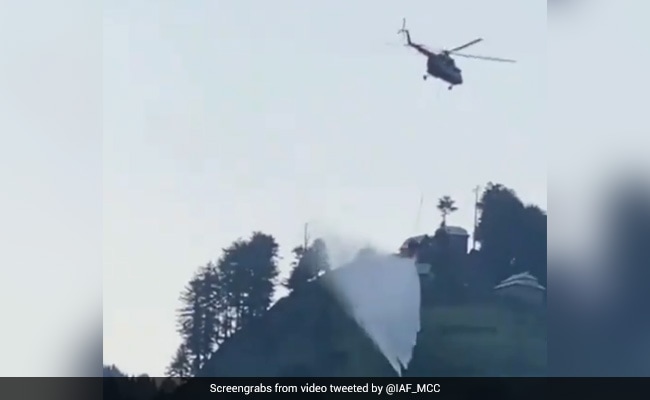 Jammu and Kashmir: An official said the cause of fire was not known immediately.

An Indian Air Force (IAF) chopper made several sorties to help douse a major fire that raged for nearly six hours and destroyed over a dozen residential houses in a remote village in Jammu and Kashmir's Ramban district on Tuesday, officials said.

No one was injured in the fire which started around 11 am in the densely populated Hijwa village of Khari, 28 kms from Banihal sub-division, rendering over 36 families homeless, the officials said.

They said the fire spread fast as the houses are closely located and mostly built of wood with a tin roof.
The Army and police reached the spot immediately to assist local volunteers to douse the flames, officials said, adding that fire tenders from Banihal town were also pressed into service.

The fire was finally brought under control after a nearly six-hour-long joint operation with an IAF helicopter joining the mission. The IAF made several sorties and poured buckets full of water on the raging fire which was a threat to the whole village, the officials said.

Mi-17 V5 helicopters equipped with Bambi buckets were launched in the afternoon today to facilitate the ongoing firefighting operations in Hijwa village in Ramban district, J&K.

The fire has been successfully extinguished.#HarKaamDeshKeNaampic.twitter.com/DEHGEBYI0S

Station House Officer Nayeem-ul-Haq said the cause of fire was not known immediately.

Mr Islam announced immediate relief to the affected families including tents, ration and blankets and said the cases for compensation to the families would be processed speedily.