Arshdeep Singh was airlifted from Melbourne in a special flight that is being flown by Qantas after other carriers allegedly refused to fly him. 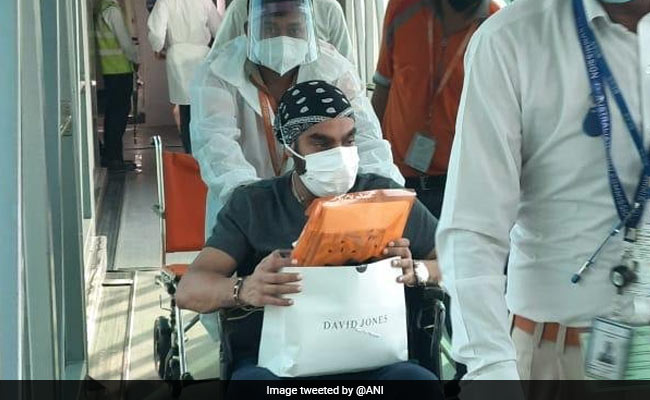 Arshdeep Singh landed at the Delhi airport around 6:15 pm today

In a rare humanitarian gesture, authorities in India and Australia came together to help repatriate a 25-year-old Arshdeep Singh, suffering from a chronic renal ailment, to India.

He was airlifted from Melbourne in a special flight that is being flown by Qantas - Australia's largest airline by fleet size - after other carriers allegedly refused to fly him. Mr Singh landed at the airport around 6:15 pm today from where he was taken to a hospital in Gurugram.

"I would like to thank the Indian and Australian governments for bringing me back to my home country safely," Arshdeep Singh said as he was wheeled out of the airport by his family.

The 25-year-old, who moved to Australia for higher education in 2018, was seen travelling in an empty flight along with his medical equipment in a video shared by former president of the Delhi Sikh Gurdwara Management Committee Manjit Singh GK.

Glad to learn that Arshdeep 25Yr #Indian#student in #Australia diagnosed with chronic renal failure has been airlifted from #Melbourne & en route to #Delhi.Thanks to @dfat@MEAIndia & @PSCINDIAN for facilitating his repatriation thru a special flight of @Qantas dedicated for him pic.twitter.com/KfE1d3ito9

Arshdeep Singh's family was struggling with visa formalities and flight bookings amid the coronavirus pandemic which had forced several restrictions on international travel.

"We didn't have visas so we decided to apply. But we couldn't travel to Australia since flights were not operating. Manjit GK and Indian World Forum pushed our case. Many commercial flights refused to bring back Arshdeep," Arshdeep Singh's brother-in-law Kunwar Anand told news agency ANI.

"On June 8, Arshdeep Singh walked into the hospital in Melbourne and within a day or two, the family got the news that he has suffered a renal failure," Manjit Singh GK told news agency ANI.

"The family was in a state of shock and we had no place to go because of the pandemic. The hospital suggested an organ transplant," he said.

Arshdeep Singh's mother Inderjeet Kaur had written to External Affairs Minister S Jaishankar and the Australian High Commissioner in India about her son's condition on June 10.

In her letter, Ms Kaur wrote that her son "has been diagnosed with a life-threatening condition" and was being treated at St Vincent's Hospital in Melbourne.

The letter was shared on Twitter by Manjit GK who had tagged PM Modi and Australian Prime Minister Scott Morrison, urging them "to facilitate her request & urgently assist her on compassionate grounds".

"I am speechless. I am very thankful to the Indian government, the Australian government and doctors, who quickly started his treatment and informed me after his dialysis. After waiting for so many days, he is finally coming here for his further treatment," Inderjeet Kaur told the news agency.