With Assembly elections in Tripura less than four months away, regional party TIPRA, led by Tripura's royal scion Pradyot Manikya Debburman, today held a massive rally in Agartala, where the TIPRA leader promised land to every landless tribal in the state if voted to power.

Taking a swipe at the TIPRA chief's promise, Devid Debbarmma, the general secretary of BJP's Janajati Morcha, said: "Today, the royal scion spoke about land patta and not greater Tipraland. So, have they climbed down from their demand ?"

Political observers feel that today's rally by the Tipraha Indigenous Progressive Regional Alliance (TIPRA) was much bigger than any conducted by the ruling BJP in recent times.

Bhaichung Bhutia, former Indian footballer and the chief of Sikkim's Humro Sikkim party, was also present at the rally. 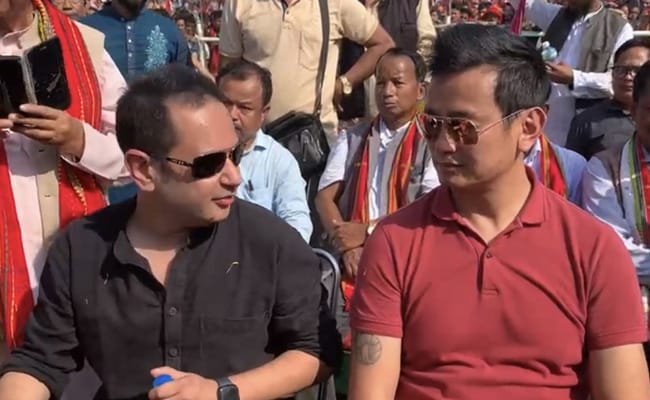 Bhaichung Bhutia (right), former Indian footballer and the chief of Sikkim's Humro Sikkim party, at the rally in Agartala

The BJP already finds itself on a sticky wicket in the state with TIPRA's surge in tribal areas. Out of the 60 seats in Tripura Assembly, 20 are reserved for tribals, where TIPRA is likely to be a crucial factor.

"We will not rest until our demand for a Greater Tipraland is met," Mr Debburman said.

Tipraland is the name given to a proposed state for the indigenous Tripuri people in the tribal areas of Tripura. These indigenous people have demand that the Tripura Tribal Areas Autonomous District Council and some surrounding areas be converted into a separate state.

Attacking the BJP, the TIPRA chief alleged that the party was indulging in petty politics. "I'm not a big person like [Narendra] Modi ji. They will come here and promise to give Rs 5,000 crore, but if we come to power, we shall allot land patta to everyone," he said.

Patta is agricultural land granted by the government to an approved cultivator with land revenue exemption.

The TIPRA chief further said: "We are not against any community. We treat Hindus, Muslims, Christians and Buddhists equally."