PM's R-Day Attire Has Mark Of Uttarakhand, Manipur. Both Vote In Days 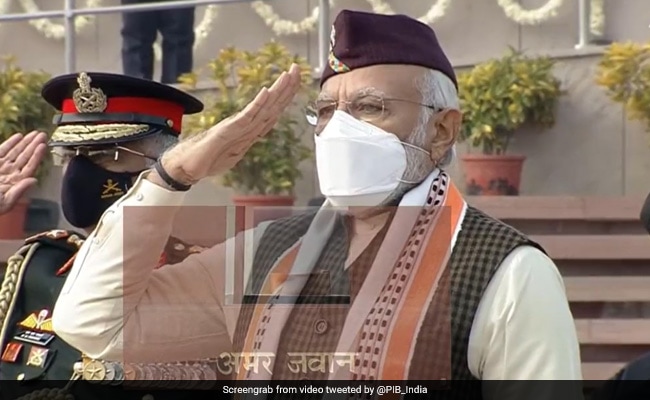 Uttarakhand and Manipur are among the five states that vote next month in high-stakes elections.

Prime Minister Narendra Modi today wore a traditional cap from Uttarakhand and a stole from Manipur for the grand parade to celebrate India's 73rd Republic Day.

The cap was adorned with a "Brahmakamal", which is the state flower of Uttarakhand, Chief Minister Pushkar Singh Dhami tweeted.

Expressing pride at PM Modi's gesture for his state, Mr Dhami wrote: "I thank the Prime Minister on behalf of Uttarakhand's 1.25 crore people."

The Prime Minister has been seen wearing the traditional Manipuri stole, "Leirum Phi", often. The handwoven scarf is typical of Manipur's Metei tribe.

Uttarakhand and Manipur are among the five states that vote next month in high-stakes elections.

In last year's Republic Day celebrations, PM Modi wore a crimson turban gifted to him by the Jamnagar royal family of Gujarat. The headgear is called the "Halari Pagh".

In the years before, he had worn colourful turbans with a long trail called the "Safa".

The Prime Minister is known to wear the Safa for his Independence Day speech at the Red Fort.