Seven soldiers were killed in yesterday's terror attack on army base in Nagrota in Jammu area.

Nagrota, Jammu: When a group of three terrorists breached the army base in near Jammu at daybreak yesterday, it was two young majors in their early 30s that fought them - and ultimately died in the line of duty. Majors Gosavi Kunal Mannadir and Akshay Girish Kumar led Quick Response Teams, each with about 15 men, to counter the terrorists, of whom three were killed after a five-hour gun battle. It's not clear if there were other terrorists who managed to escape.

Seven soldiers, including the two majors, died as they defended the camp at Jagrota and a group of hostages which included women and two babies.

Details being shared by the army now reveal how the base was protected after the terrorists entered.

The main goal of the Quick Response Teams was to try and pin down the terrorists, who had also split into three groups so that they could not approach the 8 unarmed men, women and children. The terrorists were wearing police uniforms to be able to move easily within the base which houses nearly 1,000 soldiers just about 20 kilometres from Jammu.

The toughest part of the counter-terror operation was in preventing a potential hostage crisis. The terrorists had entered a part of the complex where families of soldiers live and then slipped into different rooms.

That placed at risk at least four unarmed officers, the wives of two officers and two babies. The process of extricating the women and children was extremely dangerous. The women used "household items" to block potential entry points in the living quarters, said the army, before their escape was enabled by cover fire from the two teams. It was after they were evacuated that the men were rescued.

The presence of the women and children prevented the army from a massive fire assault even though the Quick Response Teams dealing with the terrorists were being targeted with Under Barrel Grenade Launchers which can inflict massive casualties.

The teams countering the terrorists had to handle the evacuation of soldiers and women, ensure that their retaliatory fire was controlled and did not result in either parts of the building going up in flames or in any collateral damage.

Promoted
Listen to the latest songs, only on JioSaavn.com
Though this is the boldest attack on security forces since 19 soldiers died in a terror strike at the army camp in Uri in September, sources point out that while terrorists there were able to move around freely, inflicting massive damage, at Nagrota, they were confined quickly.

Below are the photos of the 7 soldiers who died: 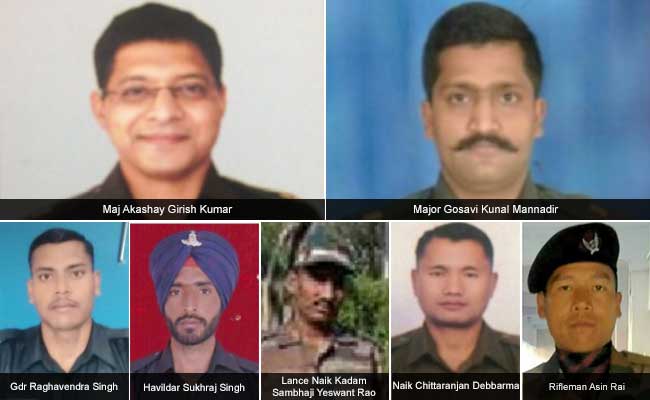