Over 2,500 guests and 25 priests were part of the wedding ceremony in Maharashtra's Palghar. 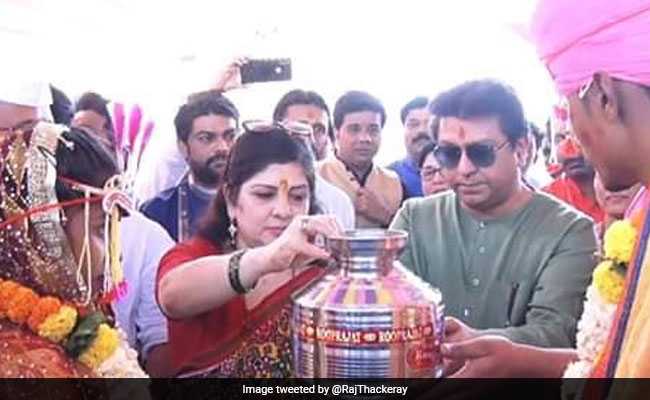 Raj Thackeray with his wife at the wedding ceremony in Maharashtra's Palghar.

Days after his son wedding, Maharashtra Navnirman Sena President Raj Thackeray arranged a mass wedding for 500 tribal couples in Maharashtra's Boisar today. He performed 'kanyadaan' for one of the brides and later handed over the marriage certificate to the couple.

Over 2,500 guests and 25 priests were part of the wedding ceremony.

"While the grooms were gifted the wedding attire, brides were given a colourful Maharashtrian wedding sari and gold mangalsutras. Each couple had a separate 'havan-kund'," MNS Palghar President Kundan Sankhe told news agency IANS.

The couples sought blessings of Raj Thackeray and other guests before sitting down to enjoy the wedding feast.

"This was Maharashtra's biggest mass wedding. It was performed on a grand scale to make it memorable for the couples and their families," said Pravin Patil, a local social activist.

Raj Thackeray and his wife lauded everybody involved in preparations for the mass wedding.

"Recently, my son Amit got married. We relived that joy at the community wedding ceremony," he said in a tweet.