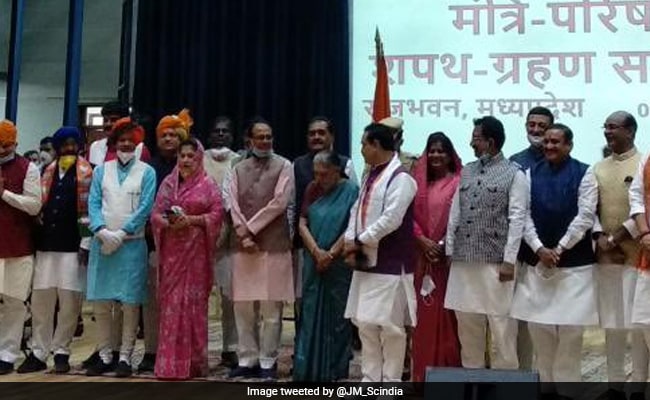 Of the 22 Congress MLAs who joined the BJP, 14 have been inducted as ministers

The expansion of Shivraj Singh ministry -- where a chunk of berths has gone to the Jyotiraditya Scindia camp -- has brought out the first fissures within the BJP in Madhya Pradesh.  Before the day was out, supporters of a number of ministry hopefuls held protests across the state, demanding that their leaders be accommodated in the ministry, and veteran party leader Uma Bharati wrote to the party's state president VD Sharma, claiming her suggestions have been completely ignored.

It was Mr Scindia's defection from the Congress with 22 MLAs that brought down the Congress government led by Kamal Nath and gave the BJP another shot at power.  But the newcomers' demand for reward -- at least 11 cabinet berths -- had not been taken to kindly by established leaders of the BJP. Even the Chief Minister made it clear that he was not happy to let go of a chunk of his loyalist team.

Uma Bharati, a former Chief Minister of the state, has another set of grievances. In her letter, which was also sent to the party's organizational secretary Suhas Bhagat and Vinay Sahasrabudhe, the BJP parliamentarian in-charge of the state unit, she said the ministers' list should be amended as it did not give proper representation in terms of region or caste.

Ms Bharti wanted the inclusion of MLAs from the Bundelkhand region and from her Lodhi OBC caste, which is a sizeable vote bank in Bundelkhand and Central Madhya Pradesh.

The 33-member cabinet has eight Thakurs, three Brahmins, one Kayastha, one Sikh, four ministers from Scheduled Tribes, four are from the Scheduled Castes.

In Mandsaur, supporters of local BJP MLA Yashpal Singh Sisodiya sat on dharna, demanding that their leader be accommodated in the ministry.

Exclusion of Ramesh Mendola has been looked upon as a political defeat for Kailash Vijayvargiya, who was considered a strong opponent of Jyotiraditya Scindia since he was in the Congress. His supporters, too, took to the streets.

In Dewas, the supporters of Gayatri Raje Pawar held protests.

Of the 22 Congress MLAs who joined the BJP, 14 have been inducted as ministers. Of them, 10 are cabinet ministers and four are ministers of state. The strength of the cabinet being 34, nearly 41 per cent of the ministers are former Congressmen and 59 per cent are from the BJP.

Of the 34 ministers in the state, 14 are from the Congress, 11 of them are loyalists of Jyotiraditya Scindia. All 14 are not MLAs -- probably a first in the history of the state.

The hand of the Central leadership has been quite visible in the expansion, with the Chief Minister failing to carry his point about inducting most of his team.