After Seniors Ragged 150 UP Medical Students, Vice Chancellor Said This

The Vice-Chancellor of a prestigious Uttar Pradesh university, at which 150 junior medical students were forced to shave their heads and "bow in reverence" to their seniors in an alleged case of ragging, has appeared to defend the practice, declaring that "these kids can't even tolerate 10 per cent" of the ragging he faced as a medical student.

"You know... I was ragged so badly when I was a student in the 80s. These kids can't even tolerate 10 per cent of that. When I was a student we used to jump from walls out of respect for our seniors. The same seniors then fed us samosas and tea," Dr Raj Kumar, Vice-Chancellor of the Uttar Pradesh University of Medical Sciences in Safai village, said.

"You shouldn't touch the child... no physical torture... but you should inculcate 'sanskaar' (values) through mental pressure. Love is also involved," he added.

The Vice-Chancellor then goes on to lament the passing of "this (ragging) culture from medical".

The Vice-Chancellor's comments come as videos of an alleged ragging incident at the Uttar Pradesh University of Medical Sciences were widely shared online.

In the first of the distressing videos, which is shot from a distance, a small group of students, wearing white coats, can be seen walking in a single file. All of them have had their heads shaved. 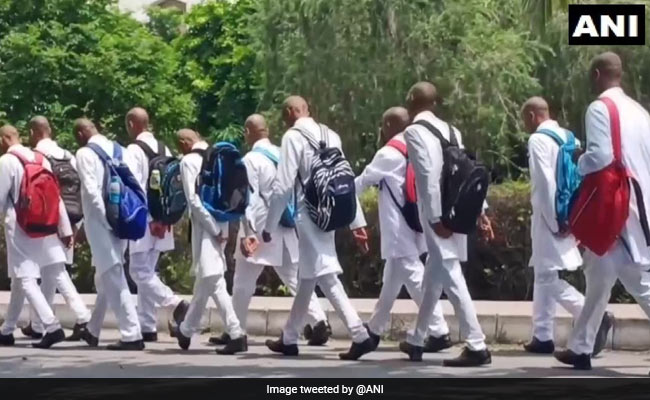 In another video, a security guard is seen standing near the students. However, he takes no apparent action to stop the alleged ragging.

Reacting to the videos, Dr Raj Kumar had assured junior students "they need not worry", and promised that action will be taken in this matter.

"Strong action will be taken against those involved. We have suspended students earlier also. I want to assure juniors that they need not worry," he told news agency ANI.

Last month a 14-year-old Hyderabad boy allegedly attempted suicide after being ragged by his classmates.

In March, two Tamil Nadu college students allegedly committed suicide after they were left depressed and demoralised by seniors who ragged them.

The number of ragging complaints received from students and institutions across India rose from 423 in 2015 to 901 two years later, according to data released in parliament last year by then Union HRD Minister Prakash Javadekar.