The Congress made its displeasure felt after Rahul Gandhi was given a seat on the sixth row for Friday's Republic Day parade. Party leaders called it a "deliberate humiliation" of their new president. 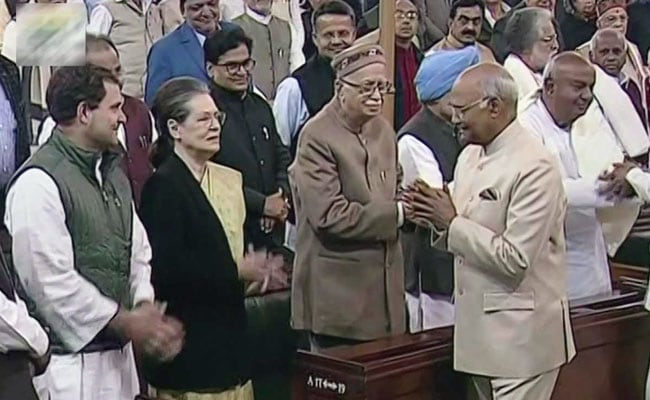 New Delhi: With the dust yet to settle on the controversy over Rahul Gandhi's sixth row seat on Republic Day, the Congress chief was given a front row seat in Parliament's Central Hall on Monday. The occasion was President's address the joint sitting of both Houses as the budget session started. The Union Budget that will be announced on February 1 is the last full-fledged budget before next year's general elections.

During the hour-long address of President Ram Nath Kovind, his first in parliament, Mr Gandhi was restive and was seen talking to senior party leader Mallikarjun Kharge.  His mother Sonia Gandhi, who was also given a front row seat alongside BJP patriarch LK Advani, thumped her desk to show appreciation as the President's speech ended.

The Congress made its displeasure felt after its chief was given a seat on the sixth row for Friday's Republic Day parade. Party leaders called it a "deliberate humiliation" of their new president.

"Rahul Gandhi is not just a Congress MP anymore. He is also the president of India's largest opposition party. And if the ruling party doesn't understand that position, it is unfortunate," senior party leader Ghulam Nabi Azad had said.

Promoted
Listen to the latest songs, only on JioSaavn.com
Mr Gandhi's office said the leader had insisted that it did not matter where he sits.

The BJP said it was convention that the leader of the largest opposition party is seated on the seventh row.  But it has not responded to the other allegation of the Congress - that the government did not facilitate any meeting between visiting foreign dignitaries and the leaders of the opposition.