On Wednesday,Yesterday, the 63-year-old Congress parliamentarian was sternly told off by Rajya Sabha chairman Venkaiah Naidu for chortling loudly during the Prime Minister's speech.

Renuka Chowdhury said PM Modi has denigrated the status of women by making the statement.

New Delhi: Bristling at Prime Minister Narendra Modi's joke on her laughter in parliament, Congress leader Renuka Chowdhury today said she would ask for action against Union Minister Kiren Rijiju, who had posted a video appearing to ridicule her.

During a debate in the Rajya Sabha yesterday, PM Modi had joked that Renuka Chowdhury's laughter reminded him of the 1980s' television series "Ramayana". Hours later, Mr Rijiju, the Minister of State for Home, shared a video that has now vanished from his Facebook page. It was a clip of the much-talked about exchange in parliament, but cheekily began with what many interpreted as PM Modi's insinuation - the "evil laugh" of Surpanakha, the sister of demon king Ravana, from a Ramayana episode. This morning, Mr Rijiju posted another version on Twitter - without the Surpanakha clip.

Yesterday, the 63-year-old Congress parliamentarian was sternly told off by Rajya Sabha chairman Venkaiah Naidu for chortling loudly during the Prime Minister's speech. "What happened to you? If you have some problem, see a doctor,"Mr Naidu said. 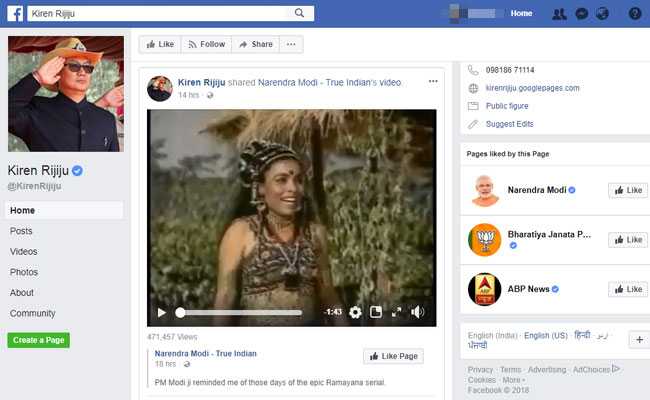 The house burst into laughter and BJP lawmakers thumped their desk while many in the Congress squawked in outrage.

"PM has denigrated the status of women. I am a mother of two daughters," Ms Chowdhury said.

"The government should apologise," added her colleague Pramod Tiwari.

Promoted
Listen to the latest songs, only on JioSaavn.com
Union Minister Smriti Irani countered: "I was present there. I heard the kind of indecent remarks she was making on PM Modi. Is it justified that she makes indecent remarks and when those remarks are met sarcastically she makes her gender her shield?"

"Ramayan", based on the epic chronicling the life of god-king Rama, enjoyed cult popularity in the late 1980s.