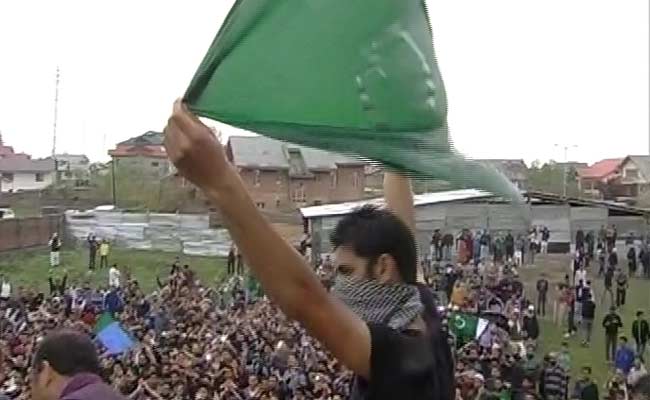 An FIR or police complaint has been filed but there have been no arrests yet.

"The law will take its own course, we can't ignore law," the Chief Minister today said.

But a member of his People's Democratic Party or PDP has controversially said that democratic space cannot be denied to separatists.

"Separatism and Pakistan constituency in Kashmir is a reality and we have to deal with it. We can't deny democratic space to these people. It is an ideological battle now. We have to make them mainstream by giving them democratic space," said Wahid Rehman Parra, the PDP's youth president and spokesperson.

Masarat Alam, whose release from jail in March ignited a massive political controversy, had organized the rally to welcome Hurriyat Conference hardliner Syed Ali Shah Geelani back to the Valley after several months in Delhi.

44-year-old Alam, a hardliner, is accused of organizing stone-throwing protests across the Kashmir Valley in 2010, in which more than 100 people were killed. He was released days after the PDP took power in alliance with the BJP.

Promoted
Listen to the latest songs, only on JioSaavn.com
The separatist rally is likely to amplify tension between the ideologically divergent parties who came together to give Jammu and Kashmir a government on the basis of a common minimum programme.

As opposition parties attacked the BJP-led central government over Masarat Alam's release, Prime Minister Narendra Modi had said in the Lok Sabha, "I also lend my voice to the outrage on the release of the separatist... this is not one party's outrage, it is the nation's outrage."