Amarinder Singh said the AAP is non-existent in Punjab and "there is absolutely no need for the Congress in the state to go for an alliance. 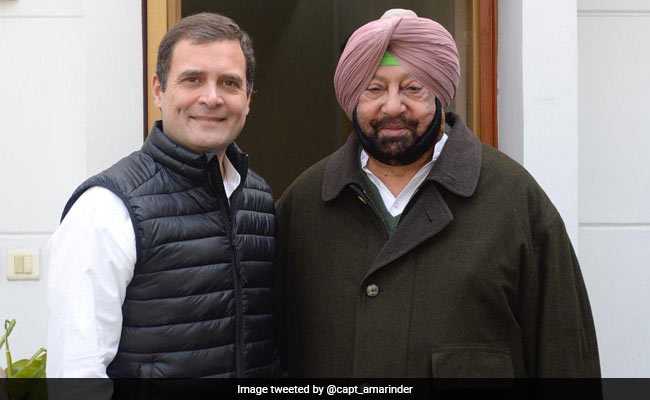 After meeting Rahul Gandhi on Monday, Punjab Chief Minister Amarinder Singh ruled out the need for any alliance with the "non-existent" Aam Aadmi Party (AAP), but said the decision on tie-up would be taken by the high-command.

Talking to reporters after the meeting, Mr Singh said the AAP is non-existent in Punjab and "there is absolutely no need for the Congress in the state to go for an alliance with Arvind Kejriwal's party".
He said the Congress state unit has already conveyed this view to the high-command, however, the matter was not discussed at today's meeting with Mr Gandhi.

Mr Singh is learnt to have discussed a host of issues relating the state government and the party in view of the upcoming national elections. He also congratulated Gandhi on the Congress victory in three states.

"AAP has become defunct, with no identity now in Punjab, as against the situation prevailing in the last Lok Sabha elections. However, any decision on a coalition with AAP or any other party would be taken by the Congress high-command, keeping in mind the national perspective and electoral compulsions and would be followed by PPCC (Punjab Pradesh Congress Committee)," Mr Singh said.

Exuding confidence that the Congress will win all the 13 Lok Sabha seats in Punjab, he said the best and the winnable candidates will be chosen by the party. However, there has been no discussion yet on selection of the candidates, he said.

Replying to a question on a possible reshuffle in his cabinet, the chief minister said the issue of any change in portfolios was not discussed during the meeting with Mr Gandhi.

On the issue of the Kartarpur corridor, Mr Singh said while Pakistan has already started work on construction of the road on their side, development work is yet to start in the Indian side as the state government has not received any funds from the centre for acquiring land for building infrastructure.

Responding to another question, the chief minister clarified that he gave permission to his cabinet colleague Navjot Singh Sidhu to visit Pakistan for the ground-breaking ceremony of the Kartarpur corridor. "No minister can leave without the chief minister's approval," said Singh, adding that Sidhu wanted to go there in his personal capacity. However, he reiterated that he had advised him not to go as he himself had turned down the invite in view of the unprovoked killings of Indian soldiers by Pakistan in Kashmir and ISI's persistent attempts to create troubles in Punjab.

The chief minister trashed the allegations levelled by Prime Minister Narendra Modi on farm loan waiver in Punjab and said his government has already waived off loans worth Rs 3,417 crores of 4,14,275 farmers in just one year.

He said his government is committed to covering all the 10.25 lakh small and marginal farmers targeted in the scheme.

Mr Singh said the prime minister believe in misleading and deceiving people with his trumped up allegations and fabrications, but the voters of the country will not be taken in by his "jumlebaazi" again.