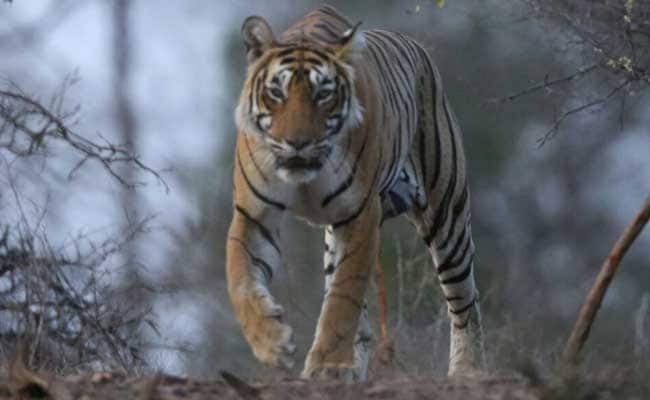 'Collar Wali' was the first tigress to be radio collared in Pench Tiger Reserve. (File)

Bhopal: An 11-year-old Royal Bengal tigress has set a record of sorts by begetting 22 cubs since 2008 in Madhya Pradesh's Pench Tiger Reserve (PTR), thus becoming the cynosure of all eyes as tourists flock in large numbers to catch a glimpse of the majestic beast.

Forest experts say the tigress' popularity is akin to India's most famous feline 'Machli', of Rajasthan, who died last week.

The tigress gave birth to five cubs in 2011 and reared all of them, he said.

According to the last tiger count of 2014, the striped animal population in PTR, spread over Seoni and Chhindwara districts of MP, was between 35 and 49, he said.

T-15 is known as 'Collar Wali' as she was the first tigress to be radio collared in PTR for tracking her movements, though her radio collar is defunct now, another forest official said.

He said the tigress lives in Karmajhiri range in the core area of PTR and her offsprings have raised the population of big cats in the tiger reserve.

The tigress was born to tiger T-1, also known as Charger, and tigress Badimata in 2005, wildlife activist from Seoni, Sanjay Tiwari said.

Charger and Badimata too used to be a major tourist attraction once, he informed.

Mr Tiwari said "tiger enthusiasts both from India and abroad are crazy about Collar Wali. They stay put in hotels just to get a glimpse of the tigress".

Earlier, India's most famous tigress 'Machli', of Ranthambore Tiger Reserve, died last week. The tigress was born in 1996 and was considered the world's oldest big cat. The feline had 11 cubs.