The three cabinet ministers who contested the Lok Sabha election and won are SP Singh Baghel from Agra, Rita Bahuguna Joshi from Allahabad and Satyadev Pachauri from Kanpur. 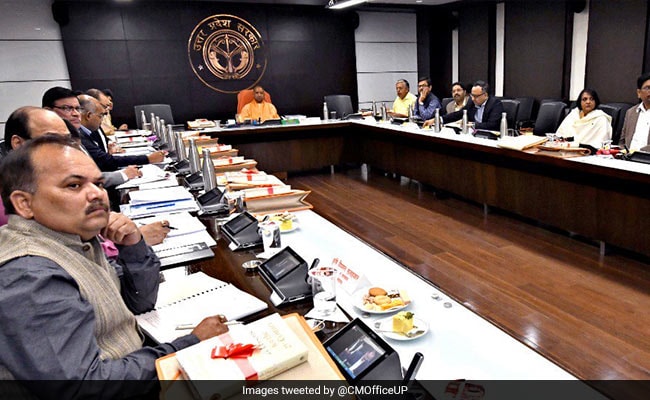 Yogi Adityanath indicated during an interview to PTI that a cabinet reshuffle was on the cards. (File)

The BJP's win in Uttar Pradesh has paved way for the first reshuffle of Chief Minister Yogi Adityanath's council of ministers to fill the vacancies created by three state ministers winning the Lok Sabha election and a fourth being sacked.

The exercise, the first since March 2017 when the Yogi Adityanath government was sworn in, is also likely to reward party's leaders for their hard work in ensuring a win in 62 of the 80 seats in the state, BJP sources said.

The three cabinet ministers who contested the Lok Sabha election and won are SP Singh Baghel from Agra, Rita Bahuguna Joshi from Allahabad and Satyadev Pachauri from Kanpur.

A vacancy has also been created after disgruntled minister and SBSP leader OP Rajbhar was sacked by the chief minister for his outburst against his senior NDA partner, the BJP.

Yogi Adityanath indicated during a recent interview to PTI that a cabinet reshuffle was very much on the cards and he is likely to take a decision soon.

With three of his Cabinet colleagues making it to the Lok Sabha, Yogi Adityanath is likely to recognise the "hard work" of "devoted" party leaders.

All BJP ministers and MLAs were assigned some duty by the BJP leadership in specific areas and seats across the state.

Two party loyalists who are likely to be rewarded with elevated posts are Mahendra Singh and Swatantradev Singh, in-charge of the party's campaigns in Assam and Madhya Pradesh, respectively, party insiders said.

"Mahendra Singh was the party's in-charge in Assam, where the BJP won nine out of 14 Lok Sabha seats," a senior UP BJP leader told PTI.

"After the elections were over in Assam, he was assigned the task of organising the roadshow of BJP chief Amit Shah in Amethi and Gorakhpur. Both the roadshows were highly successful," the leader added.

Another leader pointed out that Swatantradev Singh was made in-charge of the crucial state of Madhya Pradesh, where the party bagged 28 out of 29 Lok Sabha seats.

"The task was indeed very challenging as the BJP had lost in the assembly elections to the Congress," he said.

"To boost the morale of the party workers and to ensure that a positive result for the party comes from that state was a tough task. His efforts paid rich dividends for the party, as Congress bigwigs such as Digvijay Singh and Jyotiraditya Scindia had to taste defeat," he added.

However, a fourth minister who contested lost his election.

With 2022 state assembly polls being the next target, the BJP will leave nothing to chance to balance the caste and region-wise representation in the Yogi Adityanath Cabinet.

The BJP has already elevated the status of minister Anil Rajbhar to counter the fallout of the exit of Om Prakash Rajbhar of Suheldev Bhartiya Samaj Party from the alliance.

Anil Rajbhar has been given all the departments that SBSP leader held in a bid to project him as a true and more effective ''Rajbhar leader''.

The monsoon session of the UP Legislative Assembly is likely to begin in the next couple of months. However, it is yet not clear if the cabinet rejig would take place before or after the state legislature meets.