After Clashes, Shillong Artistes Strum Their Guitars For Peace And Unity

The purpose of the event "Music For Protection And Future Of The People" is to get people to unite and understand the importance of peace even in trying times, organisers said. 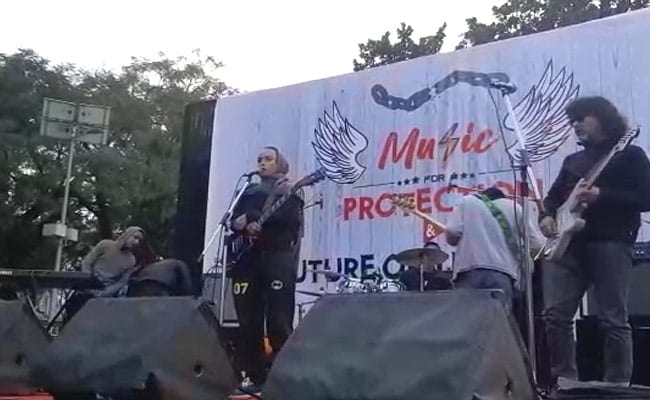 Musicians play music to alleviate the situation in Shillong after the recent clashes.

Like artistes in Assam, musicians in neighbouring Meghalaya have come up with a unique way to protest the Citizenship Amendment Act while ushering peace back into state capital Shillong after the clashes from last week.

After days of curfew and Internet shutdown in the hill city known popularly as India's rock and roll capital, these musicians took out a unique initiative titled "Music For Protection And Future Of The People" to convince the people into laying down arms.

One of the bands sang reggae legend Bob Marley's Africa Unite to the accompaniment of guitars with a message that the Northeast should come together and speak in one voice. "India has been in a state of turmoil for the last 10 days, becoming a broken nation of sorts. But we believe that music and arts can act as the best healing balm. We are here at Shillong, but we know there are people in Mumbai, Jamshedpur, Northeast India and elsewhere who are voicing their fears in one voice," said Kitkupar Shangpliang of folk band Summersalt, adding that Delhi should listen to their tunes of peace.

He said that the purpose of the event was to get people to unite and understand the importance of peace even in such trying times.

"The situation in Shillong has been scary, but we feel that music can be the best unifier. Politicians thrive on hatred, and that's not good at all. The government must not take the people's voice for granted," said Rudy Wallang of blues-rock band Soulmate.

The citizen-based event is being organised with the backing of prominent social thinkers and the Shillong Press Club. Among the other bands that participated in the event were local sensation Debra Martina Rynjah's OOtO Garage and the internationally acclaimed Aroha Junior Choir.

The Citizenship Amendment Act makes it easier for non-Muslim migrants from Bangladesh, Pakistan and Afghanistan to become Indian nationals. While many across the country and abroad have termed it "discriminatory" and "communal", residents of the Northeast oppose the law because they believe it will open the floodgates for illegal migrants into the region.