After 21 years in exile, Kashmiri Pandits focus on raising numbers 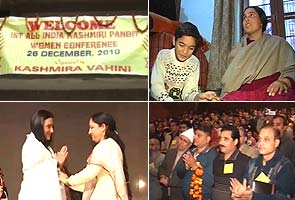 Jammu: Meet Anita, a 37-year-old woman who has decided to have a second child, eleven years after she had her first son. A Kashmiri Pandit living in Jammu for the last 20 years, she is doing this for the sake of the falling numbers of uprooted Kashmiri Pandits.

"Our population is very less now and is totally scattered," said Anita.

For the first time after completing an exile of 21 years, Kashmiri Pandits are taking steps towards arresting the decline in their population by reverting to the norm of at least three children per family to multiply their population and preserve the gene pool.

The resolution of going for more children was adopted at the first All India Kashmiri Pandit Women's Conference organised by Kashmira Vahini. The apex body of Kashmiri Pandit women is also planning to create a blueprint for helping out economically backward Pandit families in their resolve to have more children.

"There is not a marginal fall in the population of our community, but it has drastically gone down, our death rate has also shot up at an alarming pace, this is very dangerous situation for our entire community and society, we are in a state of war at this time, fighting against the enemy," said Khema Kaul, the convenor of Kashmiria Vahini.

What has complicated the problem of population decline is the exclusivity of the community. Efforts shall be made to encourage inter community marriages to preserve the gene pool. And it's an idea that has already struck a chord. But can it be a success?

"I had some problems, I was on a course of medicines, so I was not able to conceive, but after a couple of months, I will definitely think about the second issue," said Suman.

Promoted
Listen to the latest songs, only on JioSaavn.com
Adding to their problems is forced migration that induced a series of stress related diseases among the Pandit women. Social structure of Kashmiri Pandits too has been badly hit by migration, most of them have lost their sense of privacy since they are living in one room tenements in migrant camps, and as a result, their numbers are dwindling.

However, for the unique experiment to succeed, much will also depend on the political factors that will eventually decide the fate of the community in the exile hoping for returning to their roots in Kashmir one day, towards a better future, towards a better life.
Comments
Kashmiri Panditsfamily planningGene poolKashmiri migrants