Defence Minister Nirmala Sitharaman made the pitch for investment seeking to give a big push for the 'Make in India' initiative at Asia's premier air show which began at the Yelahanka air base. 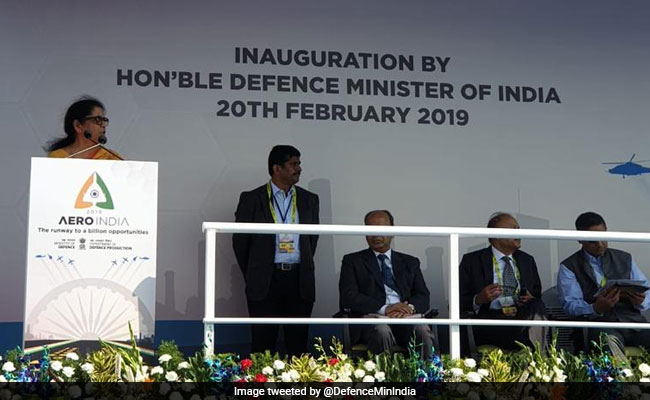 Defence Minister Nirmala Sitharaman addresses a gathering at the Aero India 2019 in Bengaluru.

India has invited investors to capitalise on the ecosystem prevailing in the aero space and other sectors and pitched for joint venture partnerships, saying it offered a big market in Defence manufacturing.

Defence Minister Nirmala Sitharaman made the pitch for investment seeking to give a big push for the 'Make in India' initiative at Asia's premier air show which began at the Yelahanka air base, north of Bengaluru.

The event comes a day after two aircraft of Surya Kiran, Indian Air Force (IAF)'s aerobatics team, collided mid-air, killing a pilot and injuring two others who ejected to safety.

At the air show, American Defence giant Lockheed Martin unveiled the F-21 multi-role fighter jet for India, to be produced locally, as it eyed a multi-billion dollar military order.

"Hundred per cent FDI is possible now in the defence sector, so I invite all investors to consider to capitalise on the ecosystem which prevails for Aerospace and other segments which can help manufacturing in India," Ms Sitharaman said in the inaugural remarks.

Noting that India has manufactured till date more than 4,000 aircraft, she said there is a "great possibility" for the Original Equipment Manufactuters (OEM) from abroad to come and find joint venture partners.

She said the OEMs have a "captive market" and they could scale up production, besides making exports from India. India also has a robust supply chain with 10,000 micro, small and medium entrepreneurs who make 80 per cent of the components, aggregates and assemblies of complex weapon system and aircraft, the minister added.

She said between 2014-15 and October 2018, as many as 150 contracts worth about Rs 1,27,500 crore had been signed with Indian vendors for procurement of defence equipment for armed forces.

Ms Sitharaman said the government has recorded acceptance of necessity for 164 proposals worth Rs 2,79,650 crore under various categories of capital procurement including Make in India and Buy Indian. "This means the request for proposal are issued to the Indian vendors," she said.

The defence ministry is ensuring that procurement orders are given to Indian vendors, she added.

Ms Sitharaman said the value of production in respect of the Ordnance Factory Boards and also the defence public sector undertakings have grown from Rs 43,746 crore in 2013-14 to 58,163 crore in 2017-18, out of which 40 per cent of production is outsourced to the private sector.

She also said the orders given to Ordnance Factory is definitely a support given to government-run institution, but not at the cost of private sector.

"The private sector does get quite a lot of these outsourced from Ordnance Factory Boards and therefore there is a happy blending on both the private sector and the public sector under Make in India norms," Ms Sitharaman said.

The defence minister also cited some of the policy initiatives that included 100 per cent FDI in the defence manufacturing, defence offset policy-2016 and delicensing of defence items, to attract investment.

A breathtaking display of manoeuvres by military aircraft besides aerobatic teams was witnessed at the 12th edition of Aero India.

The Rafale aircraft flew at low speed to pay tribute to Wing Commander Sahil Gandhi who died in a mid-air collision between two aircraft of IAF's aerobatics team Surya Kiran during rehearsal on Tuesday.

Three IAF aircraft, with a Su-30MKi in lead, also flew in the missing man formation as an aerial salute to Wing Commander Sahil Gandhi.

Unveiling F-21, Lockheed Martin said it is specifically configured for the IAF and provides "unmatched" Make in India opportunities and strengthens India's path to an advanced airpower future.