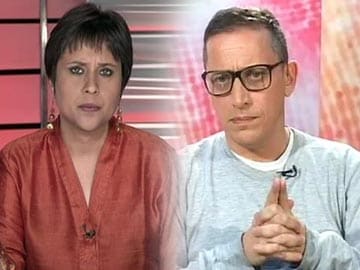 New Delhi: A sensational disclosure is made in a new book on the Mumbai 26/11 attacks. The book, called 'The Siege', deconstructs and goes deep behind the scenes to the build-up that led to the attacks making new revelations that have caused a great deal of controversy in India.

NDTV speaks to one of the two authors of the book, Adrian Levy.

NDTV: Let me start straight away with the one part of your book that has grabbed the headlines here and that is the argument that you and your co-author Cathy Scott-Clark make that the Pakistanis and the ISI, to be specific, actually had an Indian mole here in the security establishment.

And through this mole, Major Iqbal in Pakistan was actually able to give David Headley a classified Indian Army training manual that the terrorists were then able to use.

Adrian Levy: First of all, from what we can gather, it may not be that there was such a thing as mole, some kind of double agent working inside the security establishment. Certainly what there was, was some kind of conduit that was working between national security circles, broadly speaking, in India and Lashkar-e-Toiba in Pakistan.

Now how do we know that might be the case. First of all, we know that because we interviewed a lot of people within Lashkar-e-Toiba and subsequently the investigators who probed the Lashkar attack.

And some of the documentation that was recovered from the control room that Lashkar had created in Karachi and the houses, the operational bases used by the fidayeen squad, the ten men who were set sail from Karachi to attack Mumbai, included material, training material which was of the variety that would assist a military unit in understanding strategies for counter-hostage situations, top down clearances inside an urban setting and it was the kind of material that commando forces or special forces train on, and purportedly emanated from the from Indian settings.

It was both in English and Hindi. Other people referred to this too. We were told during our lengthy period of investigations by intelligence agencies, retired and serving in the Gulf states, in the UK and Europe that it was believed that there had been material taken from the military national security domain and passed to Lashkar-e-Toiba. How that happened, we found it impossible to find out.

NDTV: When you say that this person may not have been an actual mole but a conduit and it could have been anybody in the larger security establishment, would you refer to the Army? Do you refer to the police? Do you identify which security agency this could be because the military papers that went across the border were the army training manuals according to your book?

Adrian Levy: Yeah, I mean the material that seem to turn up was counter-hostage material of the kind used by specialist force like the National Security Guard.

And if you have a closer reading of the NSG operation itself which we have tried to give it to the book for the first time by talking to numerous people who have actually took part in the operation, you will find out that the various points in the Taj siege, in particular, the NSG was confronted by its own tactics.

So, for example, when it was attempting to rout the Fidayeen squad, the four gunmen from inside the Palace Wing of the tower, they discovered the squad was fully aware of how they mount room clearance, the method of entry, the method of blowing the doors and they did things like muffle all the doors with mattresses.

NDTV: May I just interrupt you to ask you that you are actually saying that when the NSG found that many of its tactics that should have remained highly classified material were known to the 10 terrorists they were combating in the Taj and this confirms your suspicion that there was somebody who had passed this on to the ISI who then trained the terrorists in that template, in the template of the NSG.

Adrian Levy: Well, it's an interesting supportive notion that when you talk to the officers who mounted the operation on the ground and to their supervisors, the senior officers who carried out the incredibly difficult operation, they noted that the defence put up was extremely tactical and of a military kind.

Now, obviously, there are two strands to this. We know that there was certain kind of coaching provided by ISI and by the intelligence and military establishment broadly within Lashkar-e-Toiba and it's also worth about pointing out as a counter here that Lashkar-e-Toiba is incredibly disciplined.

Unlike a lot of other fidayeen outfits, the Islamist outfits, they pride themselves on internal discipline. So, those two facts have to be taken into account.

So, if we lay that on the table like a corpse and sort of do a post-mortem, what do we have?

We have material recovered from the control room and the barracks, if you like, of the Fidayeen squad in Karachi, we have Lashkar itself saying how they got hold of that material under cross examination being widely discussed in intelligence circles in Pakistan and we have Gulf intelligence agencies and those in Europe also discussing the fact that their interests have been piqued by the notion that information had been passed of some kind from New Delhi. That we found was worth reporting.

NDTV: Sure. And at the heart of this entire saga...and of course what your argument is continues to be debated here in Indian intelligence circles as well. But I want to take this on to David Headley.

And one of the things that Indians have not been able to get about David Headley is was he a double agent or was he a triple agent? There is a chapter on David Headley in your book where even the ISI is saying at one point, is David Headley playing us all? That's one line from your book.

And in that same chapter you actually have this fascinating anecdote of one of David Headley's wife, Faiza, who gets extremely suspicious about him. She goes to the American Embassy and she comes back puzzled by the lack of reaction from the embassy thinking either David Headley is a terrorist or he is working for the Americans.

Now Adrian, there is a great deal of anger among the Indians here that Headley could not be extradited to India, that he struck a plea bargain with the Americans. What do you believe was the relationship between Headley and the Americans?

Adrian Levy: I think you have pin-pointed it for us one of the crux moments in the book. I mean Headley is this strange hybrid: American, Pakistani, comfortable in both societies but can look Pakistani or look American, from dual ancestry with an extraordinary mother Serrill Headley who was a philanthropist, an adventuress from Maryland.

And his dad Syed Gilani, who was in his own way an extraordinary broadcaster, much loved in Pakistan, a respectable cultural figure. And so this hybrid character, if you like, would use his dual heritage to befuddle and confound both societies.

What we found stripping Headley into pieces is that the person he always served was himself. If you actually lay all of this out, you will find is that Headley, his methodology was to betray all of those around him in order to advance his own goals. So right from the beginning when he began dealing drugs in 1984, he did it alongside his best friend from school, Rana, who was subsequently prosecuted with him. And he used Rana's jeep to smuggle drugs, he used his military car.

Adrian Levy: His loyalties lay with himself. I think what he did was use opportunities to barter himself out of a situation. When he was busted for drugs, he first turned to the DEA in America, the Drug Enforcement Administration, and said I will help you bust out of the Pakistanis.

When that trick didn't work in 1998, when he was busted again in New York, he said you have just been hit in Africa by Al Qaeda and the American embassies have been blown up in Dar es Salaam and in Nairobi and he said, I am a Muslim-American, I will penetrate Islamist outfits for you. And that was very appetizing for Americans.

And as he moved further into that field, it took him quite a while to get embedded in Lashkar-e-Toiba and it will take him till 2006, in fact to move towards the centre, and yet at that point.

NDTV: I was just going to say that your book actually delves deep into those many twists and turns of David Headley. We have just got time for a last question, you also argue that there had to have been local support in the Mumbai attacks and former Mumbai Police Commissioner Hasan Gafoor actually made that statement only to renege on it?

There were statements gathered that said that there was a group who had been nicknamed 'chuhas', the mice, and those people had gathered piecemeal data on the movements of police and landing spots etc in Mumbai and, as you say, Hasan Gafoor had made that point.

But I mean really whether or not they contributed so much to the raid, I think you know I doubt that their role is actually that significant. I think the most significant thing is Headley, the extraordinary hybrid who can stroll openly through Mumbai and do so invisibly without being challenged. And also, you know, at the root of this is the fact that a huge number of warnings had been issued and really that intelligence wasn't developed.

Adrian Levy: Yeah absolutely. I actually think that is one of the key issues that should really be addressed, which is not to say that everyone expects that everybody to catch, to pre-empt every terrorist outfit.

As you know, 9/11 was catastrophic for the intelligence services, 7/7 in London was the same. We were following half the people who were involved and they slipped through our fingers.

But what we did find and I tried to put this in a more measured tone is that there was a lot more known than was said at the time because the Pradhan Commission was so weak and only produced a 64-page paltry report.

It never really got to grips with what was known, how it was understood, the development of intelligence. So how can you make the system better, how can it ever improve if there are no lessons learnt?

NDTV: Well I think Indians continue to ask could 26/11 have been prevented? And those are important questions you are raising. It's an important, fascinating book. Adrian Levy thanks for joining us on The Buck Stops Here.

Promoted
Listen to the latest songs, only on JioSaavn.com
Adrian Levy: My pleasure, I appreciate it.