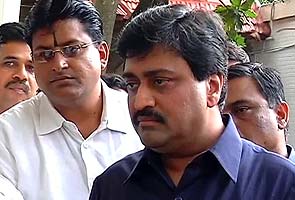 Mumbai: In fresh trouble for former Maharashtra chief minister Ashok Chavan, his relative today told a judicial panel that he secured a flat in Adarsh society through a forged receipt showing him as living in a rented accommodation when he owned an apartment in the city.

Madanlal Sharma, uncle of Mr Chavan's wife Amita, told the Inquiry Commission, headed by retired High Court judge JA Patil probing the Adarsh scam, that a rent receipt dated June 30, 2009 was furnished to the society which showed him as a tenant and his niece as owner of the Andheri flat which belonged to him.

According to by-laws of the society, membership could be granted only to those who did not own flats in Mumbai. "I am the owner of a flat in suburban Andheri since 1985. My application form seeking membership in Adarsh says I do not own any flats in the city. This is incorrect. I don't know who filled my form. I only signed it," Mr Sharma told the two-member commission.

Mr Sharma, brother of Mr Chavan's father-in-law, had sought membership on August 13, 2009 and it was granted on August 30 the same year.

"A rent receipt dated June 30, 2009 was issued to the Adarsh society showing that my niece Amita Chavan is the owner of the flat in Andheri and she has rented it to me. This receipt is incorrect. Amita is the wife of Ashok Chavan," Mr Sharma said.

He told the commission that Ashok Chavan was the chief minister when he had applied for membership and when his application was approved.

Mr Sharma said that he had taken a loan of over Rs 65 lakh from one Malav Shah of Pune whom he did not know personally. "Except for Rs 50,000 the entire amount was paid through a loan taken from Malav Shah. I don't know who this Malav Shah is. His grandfather Hiralal Shah is a family friend though I don't know him personally," the 84-year-old said.

When Mr Sharma said he had not given any security for the loan, commission chairman Mr Patil quipped, "This was a private transaction." According to CBI, which has already charge-sheeted Mr Chavan and 12 others in the case, Malav Shah is the son of Pune-based builder Jayant Shah, who is a close associate of Ashok Chavan. Malav Shah had also financed the flat purchased by Mr Chavan's sister-in-law Seema Sharma.

Mr Sharma said soon after the scam came to light he had sent a letter to the society on October 29, 2010 seeking to withdraw his membership.

"I did this willingly. I learnt through media that there were allegations of irregularities in the society. It was causing embarrassment to our family and hence we thought it best to withdraw membership," he said.

Asked by the commission as to why he had applied for membership in Adarsh when he already had a flat in Andheri, Mr Sharma said, "I am an old man. Even my sister-in-law Bhagvati Sharma residing in south Mumbai was unwell. Hence I wanted our entire family to live close to each other."

Promoted
Listen to the latest songs, only on JioSaavn.com
Mr Chavan has been accused of allowing 40 per cent reservation for civilians in the controversial housing society, said to be originally meant for defence personnel and families of war heroes, as quid pro quo for securing flats for his relatives.