Ad-Hoc Teachers In UP Shave Heads Demanding Regularization Of Jobs

Shiksha Mitras appointed during the BSP rule in the state were provided a two-year Basic Training Course (BTC) meant for primary teachers through distance education. 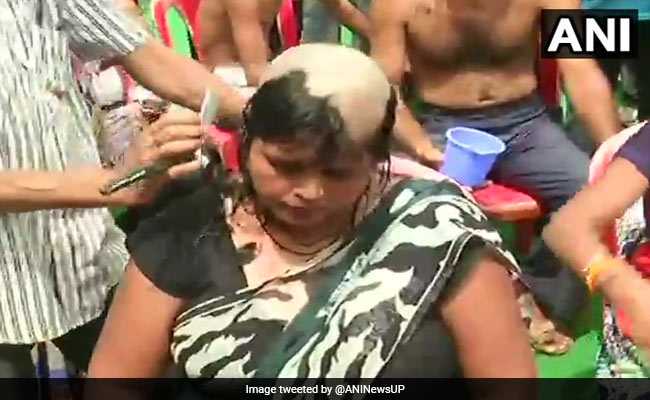 The protesters have been staging dharna for the past 69 days.

Hundreds of Shiksha Mitras (ad-hoc teachers), including women, today tonsured their heads demanding regularisation of their services.The protesters raised anti-government slogans at the Eco Garden in Lucknow where they have been staging dharna for the past 69 days.

The Brahmins among the protesters had given up their janeu (sacred thread) in protest on May 26, said Uma, the president of Shiksha Mitra Association in Uttar Pradesh.

"It is a matter of regret that women were forced to shave their heads in the state which is led by a 'mahatma'," she said.

Elaborating on the demands, Uma said it included compensation to the families of hundreds of Shiksha Mitras who she claimed lost their lives in the agitation, making their jobs permanent and issuance of appointment letter to those who have cleared the Teacher Eligibility Test (TET).

In a setback to nearly two lakh contractual teachers in primary schools across Uttar Pradesh, the Allahabad High Court in 2015 declared as illegal the state government's move to regularise them and appoint them as assistant teachers.

Shiksha Mitras appointed during the BSP rule in the state were provided a two-year Basic Training Course (BTC) meant for primary teachers through distance education.

Uttar Pradesh has over 1.73 lakh Shiksha Mitras who teach in primary schools. Their jobs were regularised by the state government in 2014.

In 2017, the Supreme Court quashed their appointment and declared that their contractual positions would not be converted into government jobs unless they clear TET.

After the top court's judgment, the salary of the contractual teachers came down to Rs 3,500 from the earlier Rs 38,848.

However, the Yogi Adityanath government increased the salary of contractual teachers from Rs 3,500 to Rs 10,000.