The HYC activists staged a protest in front of the Mahatma Gandhi statue and shouted slogans demanding introduction of ILP and NRC. 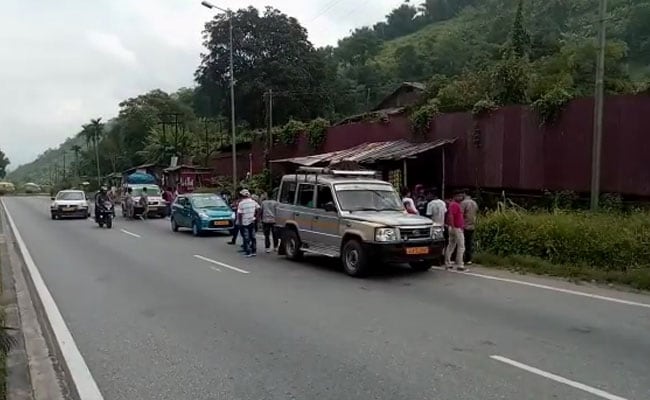 Hynniewtrep Youth Council activists on Friday stormed the Meghalaya secretariat and staged a demonstration demanding introduction of the Inner Line Permit (ILP) system and preparation of a National Register of Citizens to detect illegal Bangladeshi immigrants residing in the state.

The HYC activists staged a protest in front of the Mahatma Gandhi statue and shouted slogans demanding introduction of ILP and NRC.

Chief Minister Conrad Sangma and his council of ministers were not present in the secretariat. But Chief Secretary Y Tsering and other government officials were there.

However, the state police later pushed out the activists.

"We need to express our anger to the government so that it wakes up to our demands for introduction of ILP and to conduct the NRC to detect illegal Bangladeshi immigrants in the state," HYC general secretary Roy Kupar Synrem said.

Inner Line Permit is an official travel document issued by the Union government to allow inward travel of an Indian citizen into a protected/restricted area for a limited period. It is obligatory for Indian citizens from other states to obtain permit for entering into the restricted areas.

Mr Synrem said that the proposed entry and exit points to be set up by the Meghalaya government will not prevent illegal Bangladeshi immigrants entering the state as the authorities will ask only for the EPIC (electoral photo identity card) of the persons entering the state.

"In Assam, the people listed in the EPIC did not have names in the NRC list. There is a high possibility of them to flee from there and settle in Meghalaya," Mr Synrem said.

On the proposed Citizenship Amendment Bill, 2016, the HYC said, "If this bill is passed most Hindus from Bangladesh will seek refuge in India and the indigenous people of Meghalaya will be overwhelmed."

Meanwhile, the Meghalaya police admitted that there was a breach of security in the secretariat due to intelligence failure.

"We had no intelligence inputs. It was only once these people have congregated I got information," Davies Marak, the district police chief of East Khasi Hills said.

"They entered like normal people, they did not come in a group so our people did not know that they belong to the same group. After entering, they took out the placards," he said.