From Politicians To Actors, Mumbai Residents Take To Twitter For Aarey 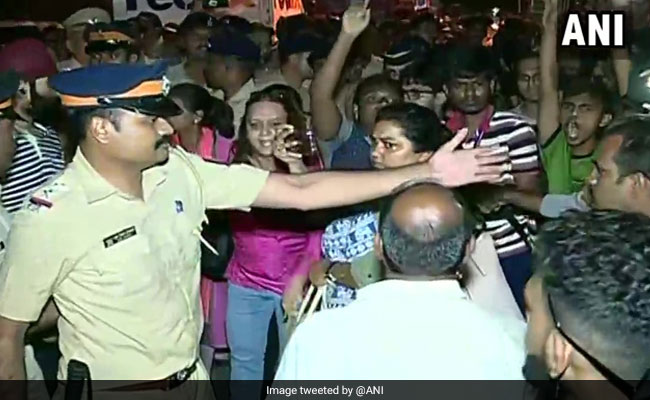 Protests that broke out on Friday night continued this morning as the authorities began cutting down trees at Mumbai's Aarey Colony to build a car shed of the Mumbai Metro. On Friday, the Bombay High Court refused to declare Aarey Colony a forest and declined to quash the Brihanmumbai Municipal Corporation (BMC) tree authority's decision to allow cutting of over 2,600 trees in the green zone to set up the metro car shed.

Shiv Sena leader Aaditya Thackeray extended his support to activists opposing the cutting of trees. In a series of tweets, Mr Thackeray termed cutting of trees as a "shameful and disgusting" act which was carried out "in cover of night".

A project that should be executed with pride, the Metro 3, @MumbaiMetro3 has to do it in the cover of the night, with shame, slyness and heavy cop cover.
The project supposed to get Mumbai clean air, is hacking down a forest with a leopard, rusty spotted cat and more

@MumbaiMetro3 Shame !!
Entry into Aarey has been blocked even for Best buses and even residents,if this Shameful act is giving you so much fear why the hell are you even performing it.#SaveAarey@AUThackeray

A sad day today where so called development wins over quality of life and preservation of environment. The trees are already being chopped down in the dark of the night. This is murder of mother nature and we will all have to pay for it. God help Mumbai https://t.co/BZvnfbwNYW

"Lathi Charge done for the first time at the peaceful protests for Aarey," political leader from Gujarat, Jignesh Mevani said.

This is ridiculous! @AUThackeray you've been tweeting in support of #SaveAarey . Would you want yourself to be dragged this way or will your govt release all the non-violent protesters, incl women, who were illegally detained and kept at different police stations in the city? https://t.co/n9suikdlbY

"Cutting trees at night is a pathetic attempt at trying to get away with something even those doing it know is wrong," Filmmaker Farhan Akhtar too tweeted.

"This myopia towards the future of Earth will come to haunt us," tweeted political activist Yogendra Yadav.

At a time when effects of climate crisis are so chillingly visible, Maha Govt's insistence on felling Aarey trees & its refusal to look for other spaces for building metro parking shed is quite worrying. This myopia towards the future of Earth will come to haunt us@Youth4Swarajpic.twitter.com/pmqXU3Ywtc

"Our trees are being cut as citizens desparately plead to Stop this!," said actress Dia Mirza.

Navratri 2022 Day 1: All You Need To Know About Rituals, Pujas Today