Raghav Chadha's nomination as member came as 24 committees were reconstituted for 2022-23; eleven got new chairpersons 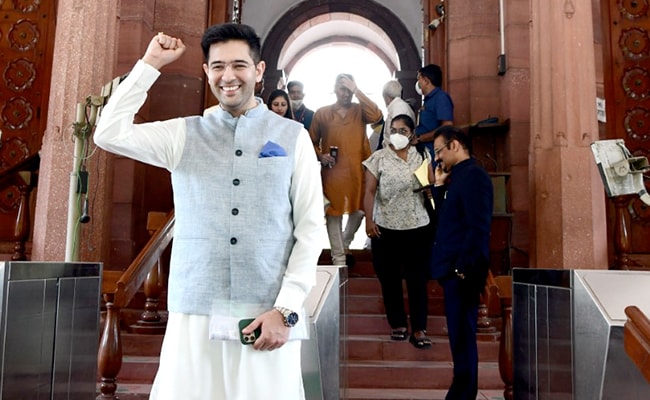 In a shuffle of Parliamentary panels, Raghav Chadha of the Aam Aadmi Party has been appointed a member of the Standing Committee on Finance. Youngest in the Rajya Sabha at 34, Mr Chadha, a chartered accountant, is one of seven members the party nominated to the Upper House from Punjab earlier this year.

Mr Chadha's nomination came as 24 committees were reconstituted for 2022-23. Eleven got new chairpersons.

The finance panel that Mr Chadha finds a place on retains BJP's Jayant Sinha in the chair. The committee oversees the laws and policies drafted by three union ministries and the NITI Ayog.

Mr Chadha spoke on economic issues such as inflation and taxation in his first session in Parliament in August this year. Besides CA certification, he has studied at Delhi University and completed a course from the London School of Economics.

Several vacancies were created in various committees as more than 100 MPs retired from the Upper House in recent months.

In the shuffle, the Congress, main Opposition party in Parliament, lost the Home and IT panel chiefships. Its Rajya Sabha MP, Abhishek Manu Singhvi, who headed the Home panel was replaced by BJP's Brij Lal, a former police chief of UP.

In the the committee for IT, Shashi Tharoor was replaced by Maharashtra's Prataprao Jadhav. With Mr Jadhav, the Eknath Shinde-led faction of Shiv Sena now has a House committee chairpersonship too.

In the Standing Committee for Environment and Forests, the Congress's Jairam Ramesh remains the chairperson.