"Hathras Model Of BJP Government": AAP On UP Violence

The AAP called the violent incident that erupted in Lakhimpur Kheri the "Hathras model of the BJP government". 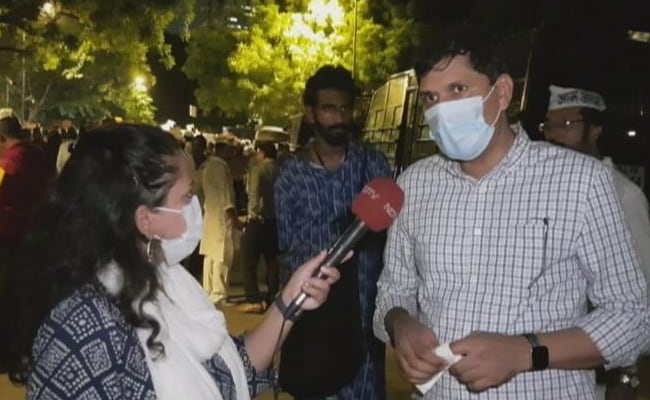 In Delhi, the AAP held a candle march at Jantar Mantar

In the wake of the violence that erupted in Uttar Pradesh's Lakhimpur Kheri district, killing eight, including four farmers, opposition parties carried out protests across India, condemning the violence.

Internet remained suspended in the violence-hit area but triggered political leaders and party youth workers who staged protests in various parts of the country. Sanjay Singh from the Aam Aadmi Party (AAP), Akhilesh Yadav of the Samajvadi Party, Navjot Sidhu of the Congress were among the many who were detained for protesting.

In Delhi, the AAP held a candle march at Jantar Mantar on Monday. Calling the violent incident that erupted in Lakhimpur Kheri the "Hathras model of the BJP government", AAPs national spokesperson and MLA Saurabh Bhardwaj told NDTV, "If this man (Union Minister Ajay Mishra) is still in the cabinet, it is shameful. We urge the Prime Minister that he throws the man out of the cabinet."

"His son should be arrested. This is the Hathras model of UP government or the BJP," he said, referring to last year's gangrape case in Uttar Pradesh's Hathras that triggered nationwide shock.

"This is all similar to what happened in Hathras. It is a complete black out in the area. The centre is trying for no one to get to know what's happening."

At least 200 people gathered at Jantar Mantar to take part in the AAP's candle march as a sign of solidarity. Earlier in the day, Youth Congress workers protested at UP Bhawan in Delhi and were later detained by security forces.