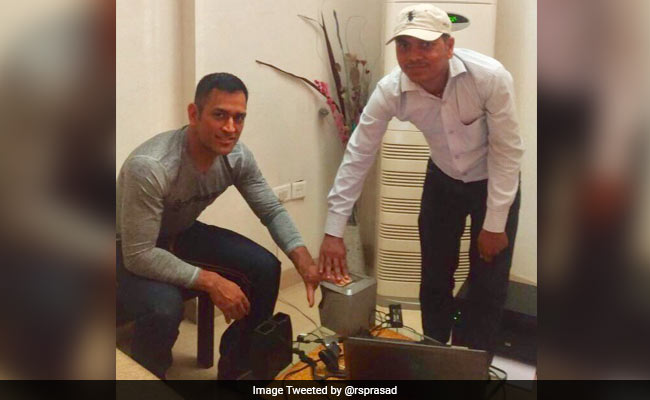 New Delhi: An Aadhaar volunteer's "fan moment" after he prepared MS Dhoni's card has become awkward for the government at a time it is confronting many questions about the biometric identification system.

In a series of tweets yesterday, the former India captain's wife Sakshi Dhoni drew Minister Ravi Shankar Prasad's attention to the fact that a tweet featuring an Aadhaar volunteer with the cricketer also included a screenshot of his Aadhaar page, unwittingly making his details public.

With the Twitter exchange redirecting media glare on the scheme, Mr Prasad today asserted that "Aadhaar is fully secure".

In the controversial tweet that has since been deleted, the Common Service Centre had said: "Former India Cricket Captain @msdhoni updated his Aadhaar details with a home visit by a CSC VLE. A fan moment for Ahsan Ali." The minister was tagged in that post.

Sakshi Dhoni made it clear that the tweets were not ok:

@rsprasad@CSCegov_ is there any privacy left ??? Information of adhaar card including application is made public property!#disappointed

In response to Sakshi Dhoni's post, the minister, confused, tweeted:

@SaakshiSRawat No it is not a public property. Does this Tweet divulge any personal information?

Sakshi Dhoni went on to explain, after which the minister assured action:

@SaakshiSRawat Thanks for bringing this to my notice. Sharing personal information is illegal. Serious action will be taken against this.

The minister said he has instructed the agency to speak to the employee who had his picture clicked with MS Dhoni and "ensure that something like this doesn't happen in future".

I-T ministry sources have clarified that the representative who helped with MS Dhoni's Aadhaar card is not a government employee but a "village level entrepreneur", part of a huge matrix of centres involved in updating information for a commission.

Promoted
Listen to the latest songs, only on JioSaavn.com
The exchange between Sakshi Dhoni and the minister drew many comments.

@SaakshiSRawat what do u mean by @rsprasad sir by saying ,"thanks for bringing this to my notice " when pic clearly shows u liked that tweet

Allegations of data security breach in Aadhaar have been in the headlines lately, with the Unique Identification Authority of India or UIDAI suspending the authentication services of Axis Bank over concerns about biometrics data being saved illegally. The rules do not allow anyone to store data taken for Aadhaar.

The UIDAI, which has issued 112 crore Aadhaar numbers, insists that its database is safe.