A night in jail for Sheetal Mafatlal 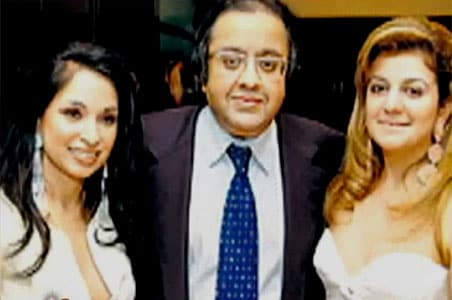 A Page 3 fixture and part of Mumbai's glam gang, Sheetal Mafatlal, will spend the night in jail. The Customs officials say she was carrying undeclared jewellery worth Rs 53 lakh into the country.

"If the value of the goods are less than Rs 1 crore and the duty sought to be evaded is not more than Rs 30 lakh, it's a bailable offence. But in spite of that, probably at the instigation of some disgruntled opponent of Sheetal Mafatlal, she has been detained," said Satish Maneshinde, the defence lawyer.

Sources say the tip-off against Sheetal came from within the family. The Mafatlal family feud is well-known -- Sheetal and her husband Atulya on one side, Atulya's mother and brother on the other. They are fighting over a multi-crore home.

Both warring sides of this prominent textile family share an apartment in Mumbai's upscale Altamont Road. The Mafatlals are an old industrial family with over 100 years of business presence in textiles and chemicals.

When Sheetal Bhagat married the Mafatlal heir, Atulya, she was a model and socialite who worked in her father's business.

Over the next five years, the socialite would become a high-flying luxury retailer credited with bringing the first Valentino store to India.

She has even profiled in Time Magazine as India's Fashion Retail Pioneer. And all along she has been making splashes with her flamboyant lifestyle. But living in the media glare extracts its own price.