Lok Sabha Elections 2019: Priyanka Gandhi Vadra has been allotted a room next to that of her brother Rahul Gandhi's at the Congress headquarters in Delhi. 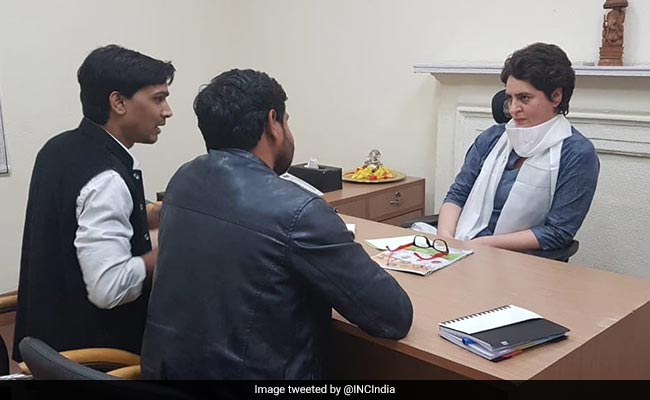 Lok Sabha Elections 2019: Priyanka Gandhi was at the Congress headquarters on Wednesday.

Ms Gandhi, 47, arrived at the party headquarters on Akbar Road after dropping her husband -- Robert Vadra -- at the Enforcement Directorate's office for questioning in a money-laundering case. She met a few party workers and leaders from the state during the 15 minutes spent in the party office, even as security personnel faced an uphill task controlling the crowd that had gathered there. A large number of party workers welcomed her by raising slogans of Priyanka Gandhi aayi hai, nayi roshni layi hai (Priyanka Gandhi has come, she has brought a new light).

"I am extremely happy to be here," Ms Gandhi told reporters soon after she reached the Congress headquarters, thanking her brother -- Congress president Rahul Gandhi -- for entrusting her with such a huge responsibility. She and Uttar Pradesh West general secretary in-charge Jyotiraditya Scindia have been allotted an office adjacent to her brother's at the party headquarters. Mr Scindia's appointment was made on the same day as Priyanka's, and he assumed charge earlier in the day.

While leaving the party office, Ms Gandhi stepped out of her black Land Rover and greeted the Congress workers waiting outside. She waved to them and shook hands with some.

Priyanka Gandhi Vadra was appointed as the general secretary and in-charge of Uttar Pradesh East on January 23. She will attend her first official meeting on Thursday.

The ruling BJP is far less enthusiastic about Ms Gandhi's entry. Surendra Singh, a lawmaker from Uttar Pradesh's Ballia, termed the Congress president as "Raavan" and his sister as "Surpanakha" in a recent media interaction.