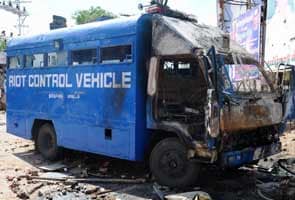 Madurai: A bus parked on an empty road with its scorched insides. Slippers lying near a rubble that's still smoking. Streets full of shops that have not opened for business on a Monday.

This is Paramakudi today, a small town in Ramanathapuram district (a ten hour drive from Chennai in Tamil Nadu.)  Six people have died since last afternoon when the police opened fire on a violent mob.

They were upset that a Dalit leader - John Pandian had been arrested to prevent him from attending the death anniversary of the late Immanuel Sekaran, a dalit leader. The police claims it was worried that his speech would provoke communal tension.

30 buses and 15 police vehicles were damaged by a large crowd that also hurled stones at the police after news of Mr Pandian's arrest spread. The police used tear gas and lathi-charged the crowd  of nearly 700.

Chief Minister Jayalalithaa said in the Tamil Nadu assembly that a retired High Court judge will determine the chain of events that led to the firing.  Yesterday, she had said the police had no option but to shoot at the crowd for self defence and to protect public property.  She also suggested some parties had instigated the violence "for their political gain."

"The police were very responsible," said Arun Roy, the Collector of the Ramanthapuram district where the tragedy unfolded.

Promoted
Listen to the latest songs, only on JioSaavn.com
The main opposition party -the DMK - has led the criticism of the police.  Its president, M Karunanidhi, who was voted out as Chief Minister in May, said that the police should have anticipated the public reaction to Mr Pandian's arrest and planned accordingly.  Other parties like the Left and the PMK have asked that the policemen involved be suspended.