Hunt is on for three policemen who were abducted from the house of Jharkhand's BJP lawmaker Karia Munda. 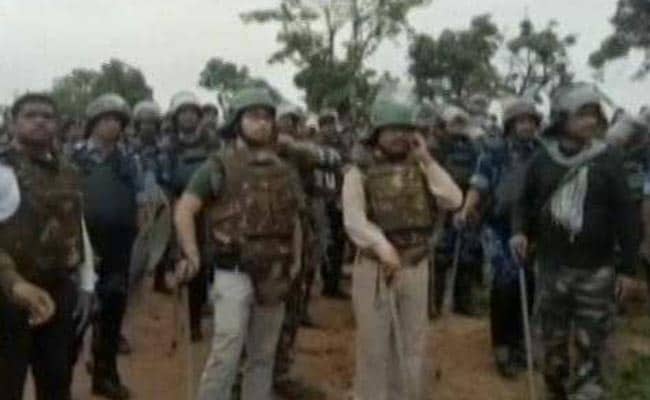 The villagers in Jharkhand pocket had clashed with the police yesterday.

Around 500 policemen are camping at Jharkhand's Ghagara village trying to trace the three policemen who were abducted from the home of BJP lawmaker Karia Munda on Tuesday. With no breakthough in sight, the police have announced a reward of Rs 50,000 on any information about the missing men.

Through the day, the police focussed on searches around three spots -- located in a 10-km radius of the village -- after tracking the cellphones of the missing men.

The abductors are yet to make any contact with the officials or place any demand.  The police suspect they are supporters of "Pathalgarhi" - an anti-establishment, self-rule movement in parts of the state's tribal belt.

The village has been deserted since last morning's violence in which one villager died and another one was injured.  After the violence, the police rounded up and detained around 200 people.

Eyewitnesses to the abduction said around 150 men had come to the lawmaker's house on Tuesday afternoon. They were protesting against the manhunt in nearby villages for the accused in rape of five activists last week.

There were four policemen stationed at the lawmakers' house but one of them managed to escape. The mob kept asking about him, said eyewitnesses to the incident. "They asked 'where have you hidden him'? What could we say? We knew nothing about it," said a relative of Mr Munda. Another relative said the mob finally dragged away the three policemen who were present. "They took away their INSAS rifles too," he added.

Mr Munda is one of the state's tallest tribal leaders and a former deputy speaker of the Lok Sabha.

When the police tried to enter the village on Tuesday afternoon to search for the missing policemen, the locals resisted. The face-off continued through the night and yesterday morning, the locals attacked the assembled policemen with traditional weapons like bows and arrows and threw stones. The police responded with batons and teargas shells.

But later, even after conducting a door-to-door search of the village, they did not find any clue to the whereabouts of the missing men.

Last week, a group of six men had abducted 11 activists, including five women, from Khunti - an area nearly 100 km from state capital Ranchi. The men had gangraped the women for four hours, violated them with a pistol and a branch of tree and forced them to drink urine, the police said. They had also recorded videos of the assaults on their cellphone.