The Bodoland Peoples' Front (BPF) leader Majendra Narzary was 68 and is survived by his wife and four children. 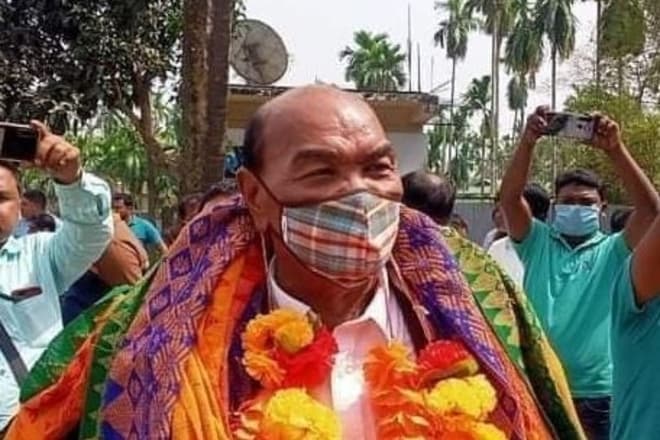 Majendra Narzary died due to post-COVID complications on Wednesday.

Four-time Gossaigaon MLA Majendra Narzary died due to post-COVID complications at a state-run hospital in Guwahati on Wednesday, its doctors said.

The Bodoland Peoples' Front (BPF) leader was 68 and is survived by his wife and four children.

The Assam government said the opposition MLA's last rites will be conducted with full state honours.

He had represented the Gossaigaon constituency in Kokrajhar district since 2006 and defeated his nearest rival of UPPL party, Somnath Narzary, by over 10,000 votes in the recently concluded assembly polls.

Mr Narzary was admitted to Gauhati Medical College and Hospital after getting infected with COVID-19 and subsequently tested negative but his condition deteriorated due to comorbidities, Health Minister Keshab Mahanta said.

Mr Mahanta had visited the MLA at the hospital on Tuesday night after he was put on ventilator support.

"Though he had won against COVID, unfortunately, he succumbed to comorbidity issues...my condolences to his family and well-wishers," the health minister said.

Mr Narzary was earlier a high school headmaster and was also associated with several social organisations.

Condoling the legislator's death, Chief Minister Himanta Biswa Sarma said, "I am pained to learn about the untimely demise of Gossaigaon MLA Majendra Narzary. A dedicated social worker, committed politician and deeply loved, his absence shall be sorely missed."