48 Killed After Bus Falls Into Gorge In Uttarakhand's Pauri Garhwal

Uttarakhand Bus Accident: According to reports, about 50 passengers were travelling in a 28-seater which was headed for Ramnagar from Bhoan

Forty-eight passengers were killed after their bus fell into a gorge in Uttarakhand's Paudi Garhwal district this morning. While 45 of them died on the spot, the critically injured were rushed to the hospital. The accident happened on the Pipali-Bhoan motorway in Pauri Garhwal's Nainidanda block.

The police and a team from the National Disaster Response Force (NDRF) are engaged in rescue operations.

According to reports, about 50 passengers were travelling in a 28-seater which was headed for Ramnagar from Bhoan. The reason for the accident isn't known yet, police said. 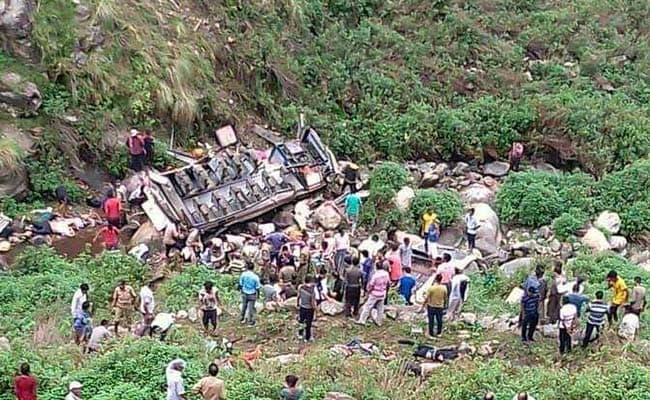 About 45 of them died instantly after the bus fell into the 200-metre-deep gorge.

If needed, the injured will be flown to Dehradoon for further treatment, he said.

Spoke to Uttarakhand CM , Shri @tsrawatbjp regrading the tragic accident in Pauri Garhwal, Uttarakhand. My thoughts are with the families of those who have lost their loved ones in this unfortunate accident. I pray for the speedy recovery of the injured.

Governor KK Paul has instructed the district administration to extend all help to the injured and the families of the dead.