Read inOther Languages
This Article is From Dec 13, 2018

A Congress source said the race in Madhya Pradesh may have tilted the other way, had it not been for monitoring by leaders including Kamal Nath and Digvijiya Singh. 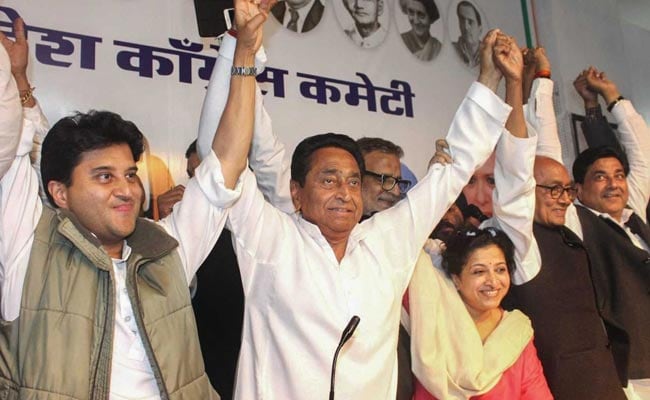 In Madhya Pradesh, Congress edged out BJP by just five seats, falling one seat short of the halfway mark.

It took nearly 3000 phone calls and an all-night vigil to ensure that the Congress did not lose its narrow lead against the BJP in Madhya Pradesh, a leader familiar with the circumstances has told NDTV.

In the end, the party edged out the BJP by just five seats, falling one seat short of the halfway mark of 115. It was able to stake claim to form government after support from Mayawati, the Samajwadi Party and independents.

But the race may have tilted the other way, said a Congress source, had it not been for an intense spell of monitoring by top Congress leaders, including Kamal Nath, Digvijiya Singh, Jyotiraditya Scindia and Vivek Tankha, the lawyer and Congress Rajya Sabha MP, holed up in a Congress war room in Bhopal for close to 7 hours.

They were assisted by a team of around 30 lawyers, as well as a battery of volunteers manning phone lines.

As counting for a final cluster of 30 closely contested seats stretched late into the night of December 1, the numbers see-sawed between the Congress and the BJP.

Voting was repeatedly stalled by a range of reasons -- from voting machine malfunctions, recounts and confusion over a new system of postal ballots.

"We felt the attempt was to ensure that the Congress did not become the single largest party," the leader said.

The Election Commission has said the delays were because of an unusually high number of seats witnessing very close contests; in some cases, the margins were less than 100 votes.

Party leaders and their associates said they made more than 3000 phone calls over 7 hours to those involved in the counting process: candidates, their agents, returning officers and Election Commission officials. A Congress team was also camped outside the Chief Election Commissioner's office in Delhi.

The intense vigilance paid off, claims the Congress leader. The Congress was just two seats short of a majority.

But the fight was not over as the four independents, all Congress rebels, were being fiercely wooed by the BJP.

Here, the role of Mayawati's Bahujan Samaj Party, which won two seats, became crucial. Around 9.30 am on Wednesday, Congress leader Kamal Nath is believed to have spoken to the BSP chief who promised support. She made the announcement at 10 am.

By 11 am, Chief Minister Shivraj Singh Chauhan had conceded defeat.