300 Yaks Die Of Starvation After Heavy Snowfall In Sikkim

A source said that the last time so many yaks had died was in 1994-95 after the region received heavy snowfall which wiped out the entire herd. 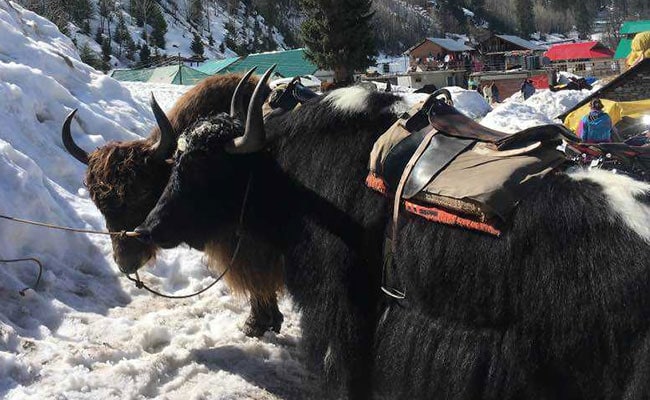 Carcasses of around 250 yaks were found in Mukuthang region, and 50 in Yumthang. (Representational)

After a bout of harsh winter weather, around 300 Himalayan yaks have died in Sikkim, said officials.

According to government sources, the yaks died in the cold desert region of North Sikkim -- allegedly due to starvation.

Following heavy snowfall since December, the animals got stranded in Munguthang and Tso Lhamu regions which are a grazing ground for the yaks.

The North District Administration tried to airdrop relief material such as grass, maize plants, flour, salt and oil but attempts were unsuccessful.

It was only after the snow melted that the deaths of the yaks came to light, officials said.

The North District Administration along with the disaster management team is surveying the area to secure the carcasses before they become a fodder for wild dogs in the area.

The team carried feed and fodder for the yaks which are still alive, he said, adding, the yaks will also be examined by the medical team.

The affected families will get compensations on the basis of a report that is being prepared by the district administration and the Indo-Tibetan Border Police, he added.

"The weather was too harsh. One heavy spell of snowfall in December was followed by even more snowfall and even the grass didn't grow. They died because of both cold and starvation," Mr Yadav told news agency AFP.

A source said that the last time so many yaks had died was in 1994-95 after the region received heavy snowfall which wiped out the entire herd.