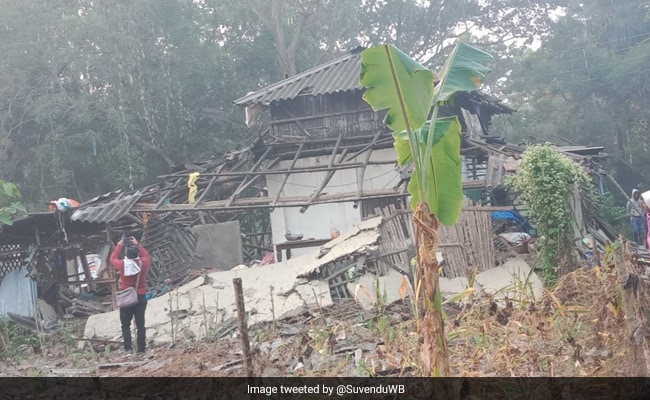 The blast was reported in a house around 11.15 pm on Friday and three bodies were recovered.

At least three people were killed and several others injured in a blast near the venue of senior Trinamool Congress leader Abhishek Banerjee's rally in West Bengal's Purba Medinipur district, police said on Saturday.

The blast was reported in a house around 11.15 pm on Friday and three bodies were recovered on Saturday morning. A few others are injured. The cause of the blast is yet to be ascertained and further investigation is underway.

"The impact was so powerful that the mud house with a thatched roof was blown off in the incident," the senior officer of Bhupatinagar Police Station said.

The three victims were identified as Rajkumar Manna, who is reportedly a TMC worker, Debkumar Manna and Biswajit Gayen, he said.

A forensic team later reached the spot and collected samples and a huge police team was deployed there.

Leader of Opposition in West Bengal Assembly Suvendu Adhikari alleged involvement of the victim TMC member in the blast and demanded an NIA investigation into the incident.

"TMC Booth President Rajkumar & 2 others died last evening while urgently making the bombs, as these bombs were intended to be hurled at Contai. Bombs are WB's most successful Cottage Industry products & are widely produced in TMC leaders' homes across Bengal," the senior BJP leader also tweeted.

BJP national vice president Dilip Ghosh held the TMC "responsible" for the incident and said that "only bomb-making industry is flourishing in the state".

The TMC leadership expressed their "shock" over the incident and alleged that it was a plot by the BJP to kill the party's Diamond Harbour MP.

"SHOCKING! This is clearly an open assassination plot that the BJP has admitted to. LoP @SuvenduWB's certainty about the usage of the bombs at Contai where our National Gen Sec @abhishekaitc is to hold a rally is a PROOF of their plan," Ms Bhattacharya tweeted.

Party colleague and West Bengal Industry minister Shashi Panja also reiterated Bhattacharya's allegations and said, "LoP SuvenduWB, trapped in his own words! Sure of the bombs to be hurled at Contai, did he already know who it was intended toward? Was it a shameless attempt to sabotage the meeting of our National General Secretary Shri @abhishekaitc at Contai, hurt him and the people?"

Senior CPI (M) leader Sujan Chakraborty questioned why Chief Minister Mamata Banerjee was silent on such incidents and demanded a statement from her.