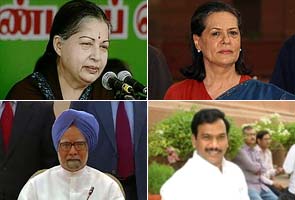 "The entire nation expects from the Prime Minister and the Home Minister when a serious charge is made...the Congress president should also give a statement on this," said Jayalalithaa.

Earlier this week, defending the charges against him in the telecom scam, which he is accused of spawning when he was Telecom Minister, Mr Raja brought Dr Singh and Mr Chidambaram into his line of defence.

Mr Raja was arrested in February for granting mobile network licences and second-generation (2G) spectrum at throwaway prices to companies who were not eligible. Two of those companies - Unitech Wireless and Swan Telecom - were able to leverage their licences to attract huge investment from foreign partners. Telenor jumped into bed with Unitech, and Etisalat tied up with Swan. "Where is the crime? Where is the conspiracy?" Mr Raja had asked in court. "Telenor buying a stake in Unitech Wireless and Etisalat buying a stake in DB Realty was totally legal as per the corporate law. The Finance Minister approved the sale in the presence of the PM. Let the Prime Minister deny it." He had also said, "What the telecom companies do after I give them spectrum is not my domain."