The hints came after AAP's National Council meeting where the party said it will utilise all its power and energy for contesting the 2019 Lok Sabha elections in Delhi, Punjab, Haryana, Goa and Chandigarh. 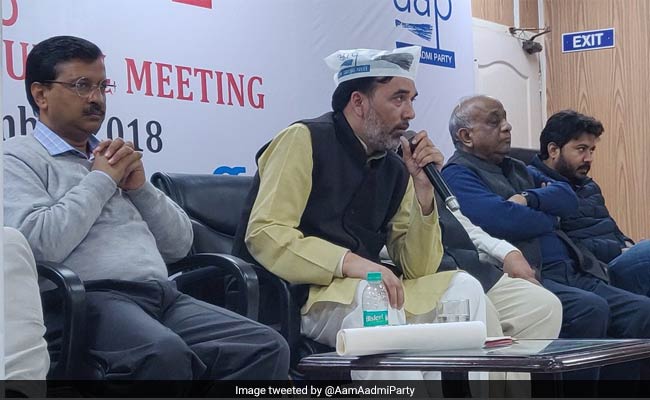 The Aam Aadmi Party on Saturday dropped hints of becoming a part of the 'grand alliance', with its leaders accepting the possibility of cooperation with other political parties to remove the Modi government at the centre.

The hints came after the party's National Council meeting where the party said it will utilise all its power and energy for contesting the 2019 Lok Sabha elections in Delhi, Punjab, Haryana, Goa and Chandigarh.

AAP Delhi convener Gopal Rai told media after the meeting that the party will contribute in whatever way it can to ensure the end of the Modi government, including cooperating with others.

"We have decided that the AAP will carry out its share of responsibility to end the dictatorship of Modi-Shah duo," Gopal Rai said, adding that besides playing its role, the party will also "cooperate with others".

The 'grand alliance' is a coalition of political parties proposed to be formed to end the BJP rule in the 2019 elections.

On Friday, the party gave mixed signals over its stand on alliance with the Congress in the 2019 Lok Sabha elections.

The AAP leaders attacked the Congress for its "conditional" loan waiver while not entirely rejecting the chances of the alliance.

Speaking to the media after a meeting of party's national executive members on Friday, AAP Delhi convener Gopal Rai had said, "The party will monitor the situation in the coming days and will take a decision accordingly", when asked about the chances of the alliance with the Congress.

AAP Punjab convener Bhagwant Mann termed the question of alliance "hypothetical", as the AAP is in opposition in Punjab and the Congress in power.

The AAP leaders attacked the Congress over the "conditions" imposed by the party for loan waivers in the three states - Madhya Pradesh, Rajasthan and Chhattisgarh -- where it came to power in recent elections.