According to an official, breeding among tigers were stopped for the last two years due to the prevailing COVID-19 pandemic. 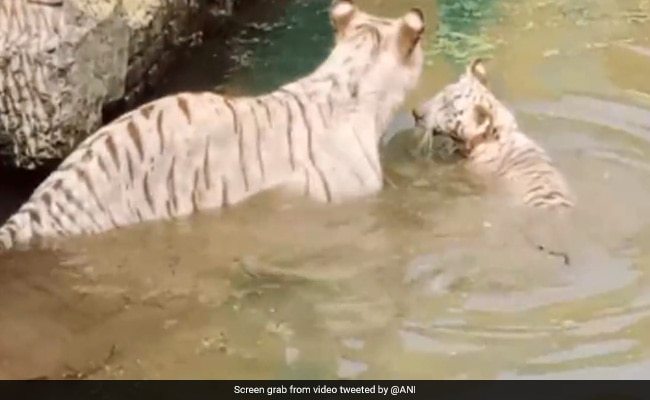 The two-month-old cub was released in the Maitri Bagh Zoo in Chhattisgarh's Bhilai.

A two-month-old white tiger cub named 'Singham' was released in the Maitri Bagh Zoo in Chhattisgarh's Bhilai district on Tuesday.

#WATCH | A two-month-old white tiger cub was released in Maitribagh zoon in Chhattisgarh's Bhilai district on Tuesday. The cub is named ‘Singham'. pic.twitter.com/4vckiFd4GV

According to an official, breeding among tigers were stopped for the last two years due to the prevailing COVID-19 pandemic.

A tiger and tigress were brought together a few months ago following which Singham was born in September. "Breeding among tigers was stopped for the last two years amid the pandemic. Six months ago, we brought Roma (Tigress) and Sultan (Tiger) and had a tiger cub on September 5. We named him Singham. Cub is healthy," Maitri Bagh Zoo in-charge, N K Jain told ANI.

Earlier in October, four tiger cubs, aged around six months, were released in the open enclosure in the Bengal Safari near Siliguri.

The move was made by the West Bengal Zoo Authority after conducting various trials studying the behaviour of the animal.

The tiger cubs which were released aged nearly about six months, which according to the officials, is the perfect age to set them free in the open (enclosure).

One tigress, Shila, which has been around in the park for nearly six years now, had given birth to four cubs on March 22 this year.

Speaking to ANI, Director of Bengal Safari park, Dewa Sangmu Sherpa said the cubs were released in the presence of forest department minister Jyotipriya Mallick, and other forest officials.

"We have released four tiger cubs which were born on March 22, 2022. Earlier, the authority conducted a few trials before the release to understand the behaviour of the animals and we found it to be very normal. So we decided to release them today," she said.

Expressing the belief that the cubs will be a centre of attraction for the visitors in the park, Sherpa said that people will have an enjoyable experience at the Safari.

"The park has already got the approval from the state Zoo Authority and now we are waiting for Central Zoo Authority regarding the Lion Safari and sloth bear Safari very soon," she said.

Cheetahs brought from Namibia are being introduced in India under Project Cheetah, which is the world's first inter-continental large wild carnivore translocation project. Out of the eight cheetahs, five are female and three are male.