14 Indian sailors rescued after being hijacked by Somali pirates 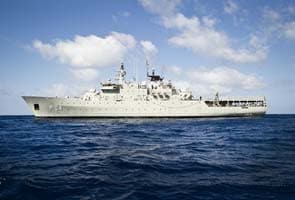 Abuja: Fourteen Indian sailors, who were hijacked in the Gulf of Aden, have been rescued after counter-piracy ships from the European Union and NATO forced Somali pirates on board their cargo vessel to flee.

"Fourteen Indian sailors are now safe, after pirates, who took control of their cargo vessel on June 5 in the Gulf of Aden, abandoned the attack hours later after European Union Naval Force warship HSwMS Carlskrona, together with NATO counter piracy Dutch warship HNLMS Van Speijk, closed in," the EU Naval Force said in a statement.

This type of cargo vessel, known as a dhow, has been used in the past by pirates as a 'mother ship', to enable them to sail far out to sea to attack passing merchant ships.

The master of the Indian dhow had sent out an alert, saying that it was under attack from 12 armed pirates, it said.

"Upon hearing the alert, Royal Swedish Navy warship, HSwMS Carlskrona, which has been part of the EU's counter piracy mission, Operation Atalanta, since April 6, closed the scene and as darkness fell, maintained a constant watch on the vessel."

As the Swedish helicopter from HSwMS Carlskrona overflew the scene, the pirates, now under increasing pressure from the military forces, forced the master to close the Somali coast so they could abandon the vessel in the dead of night.

Shortly afterwards, it was with a great sense of relief, that the Indian master was able to report to the European Union Naval Force that all the pirates had left his ship and that none of his crew were injured.

"What is important is that fourteen Indian sailors are now safe and able to return to their families, after what must have been a terrifying ordeal.  This latest attack once again shows that the threat from piracy is real.  We must all remain vigilant," said Rear Admiral Bob Tarrant, the Operation Commander of the EU Naval Force.

According to a World Bank report in April, 1,068 attacks have been carried out by Somali pirates since January 2005.

Promoted
Listen to the latest songs, only on JioSaavn.com
The 'Pirates of Somalia: Ending the Threat, Rebuilding a Nation' report said of these, 218 resulted in successful hijackings, with an estimated 53 million dollars average annual ransom paid. Between 82 and 97 casualties are believed to have occurred as a result of these attacks.