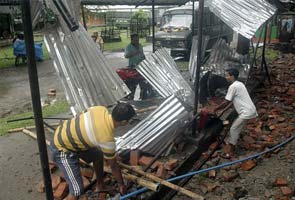 Mangan: Indian soldiers in helicopters and driving heavy road clearing equipment scrambled on Wednesday to reach a hydroelectric project in northeast India where at least a dozen people died and 40 others were missing after a powerful earthquake.

The 6.9 magnitude earthquake Sunday evening killed at least 91 people across northeast India, Tibet and Nepal. Rescue efforts have been hampered by heavy rain and mudslides that blocked the roads leading to villages in the remote, mountainous region.

One of those landslides buried the workers' quarters at a hydroelectric plant being built along the Teesta, a glacier fed river in the Himalayas, in the northern part of the Indian state of Sikkim, said Jigmee Bhutia, an official with Teesta Urja Co., which is building the plant.

Bhutia said at least 12 workers were killed and at least 40 others were missing.
Soldiers in helicopters tried to get to the area while other rescue workers used heavy machinery to try to clear the roads, local official Janim Lepcha said.

Work on the 1,200 megawatt Teesta hydroelectric plant, a joint venture between the company and the state government, was nearing completion, and the project was scheduled to be commissioned soon.

The quake has killed at least 60 people in Sikkim, 12 in West Bengal, six in Bihar, six in the neighbouring country of Nepal and another seven in the Chinese region of Tibet, officials said Wednesday.

The death toll was expected to rise as rescue workers gained access to remote villages.
Troops have been airlifting rescuers and dropping food and supplies to the cut-off villages in
the sparsely populated region.

Thousands of people moved out of their homes in the state capital of Gangtok and neighbouring villages and took shelter in the open grounds of a university building and a soccer stadium fearing aftershocks could collapse their homes.

By late Tuesday a few villagers with badly injured relatives had begun to arrive at Gangtok's main hospital.

Thurba Singh Sherpa walked for nine hours carrying his 6-year-old son, who was injured when a large boulder fell on the jeep he was traveling in.

Promoted
Listen to the latest songs, only on JioSaavn.com
Two other children died on the spot and two others, more critically injured, were airlifted by helicopters, Sherpa said.

The region has been hit by major earthquakes in the past, including in 1950 and 1897.